Family thanks officers after iPad given to child with leukemia 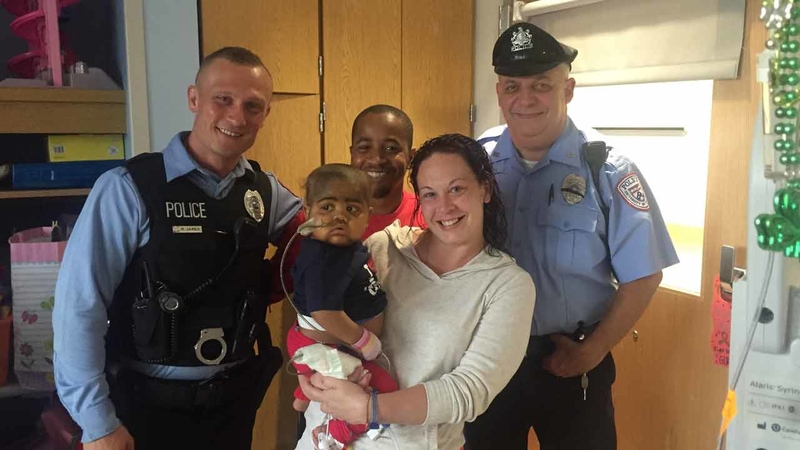 VIDEO: Family thanks officers after iPad given to child with leukemia

PHILADELPHIA -- A family is thanking generous police officers after they donated an iPad to their daughter, 21-month-old Arianna Mae Lewis, who is stricken with a rare form of leukemia.

Lewis is presently at Children's Hospital of Philadelphia undergoing rigorous treatments to keep her alive.

"It's just hard to look at her every day and see her struggling and knowing that there is nothing that we can do," father Matthew Lewis said.

Her parents say about the only real sense of joy their little girl gets is from her iPad.

But on Sunday, as the child was being moved from one room to another, the iPad went missing.

University of Pennsylvania police officers Gary Cooper and Ryan James tried to track the iPad through its internal tracking device, but it was to no avail.

"To me it was a heartbreaking thing to see the child going through what she was going through," Officer Cooper said. "Ryan brought up the subject, says 'we gotta do something better,' and I agreed. And we got together, and we made it better for her."

Officer Ryan James decided to give the little girl his own personal iPad.

He gave it to her on one condition.

"You have to come return that to me when you turn 20 and she got a kick out of that, so hopefully I'll see her when she's 20 and she'll bring it back to me," Officer James said.

At this trying moment in time when the nation seems split into fragments over policing and law enforcement policies, this family was really moved by these officers generosity & kindness.

"We wanted to broadcast another side of the police, not just everything that's bad that's going on and we hardly have time to even watch TV because she's literally fighting for her life," Lewis said.

"I couldn't stop crying so I didn't even know their names. I made him go chase them so we could get their names and say thank you and make sure they get the recognition they deserve because they truly went above and beyond," Knott said.

Arianna's parents had a message they wanted us to pass on to the officers.

"We just want to thank you from the bottom of our hearts and Arianna thanks you," Lewis said.

When they heard that, the officers had messages of their own.

"They meant something to us, too," Officer James said.