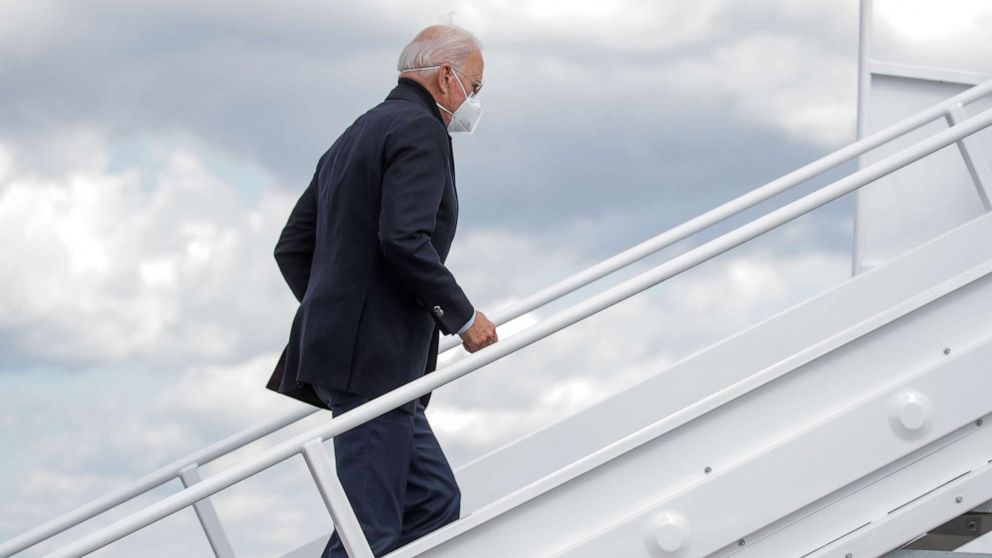 Biden then tweeted, "I'm happy to report that Jill and I have tested negative for COVID. Thank you to everyone for your messages of concern. I hope this serves as a reminder: wear a mask, keep social distance, and wash your hands."

Earlier, the Democratic nominee tweeted well wishes to the president and first lady about eight hours after Trump announced the news about his test by tweet just before 1 a.m. Friday.

He continued with a campaign visit to Michigan. When asked by ABC News why Biden was continuing to travel following his negative COVID-19 test while still within the possible incubation period for the virus, a Biden official gave the following statement:

"Vice President Biden tested negative and was not in close contact with President Trump. He also wore a mask at all times, except for when he was on stage. And we implement social distancing, mask wearing, and other best practices in all of our campaigning."

Later, speaking in Grand Rapids, Biden said he had gotten two COVID tests Friday and both were negative.

"I would like to start by acknowledging which I'm sure all of you do as well, sending my prayers for the health and the safety of the first lady and President -- President of the United States after they tested positive for COVID-19. My wife Jill and I pray that they will make a quick and full recovery," he said. "This is not a matter of politics. It's a bracing reminder to all of us that we have to take this virus seriously. It is not going away automatically. We have to do our part to be responsible."

The president's diagnosis comes two days after Trump and Biden spent over 90 minutes facing off on the debate stage in a chaotic and continuous presidential face-off.

Precautions were taken to try to mitigate the dangers of COVID-19 during the debate -- the candidates did not shake hands while entering the stage, and spoke from two socially-distanced lecterns. However, Biden, Trump and Moderator, journalist Chris Wallace, did not wear masks during their time on stage.

During the debate Tuesday, the president mocked Biden for his frequent use of face coverings.

"I don't wear masks like him. Every time you see him, he's got a mask. He could be speaking 200 feet away from it, and he shows up with the biggest mask I've seen," Trump said of Biden.

Biden and his running mate, Sen. Kamala Harris, are tested weekly for COVID-19, according to the campaign, but the 77-year-old would be considered high risk if he gets the virus given his age, increasing concerns about the risk of infection.

The Biden campaign has drawn a sharp contrast the White House on their strategy surrounding COVID-19, shifting their campaign strategy as the virus ground the country to a halt.

When COVID-19 hit a critical mass in the country in mid-March, the Biden campaign said that it would follow the guidance of public health officials, and moved to a mostly virtual campaign, not holding any in-person campaign events with Biden until June 1.

In recent weeks, Biden's has undertaken a more aggressive campaign schedule, with travel to key battleground states including Florida, Michigan, and Wisconsin.

The day following the debate, Biden took part in seven campaign stops during his 'Build Back Better,' train tour across Ohio and Western Pennsylvania.

Biden was slated to travel to Grand Rapids, Michigan, later Friday, though the Biden campaign has not weighed in on how the news of Trump's diagnosis will impact Biden's travel.

With just over one month until Election Day, the Biden campaign was also set to resume in-person canvassing this weekend, dispatching several hundred volunteers in Nevada, Michigan, New Hampshire and Pennsylvania -- four key battleground states in the presidential election.