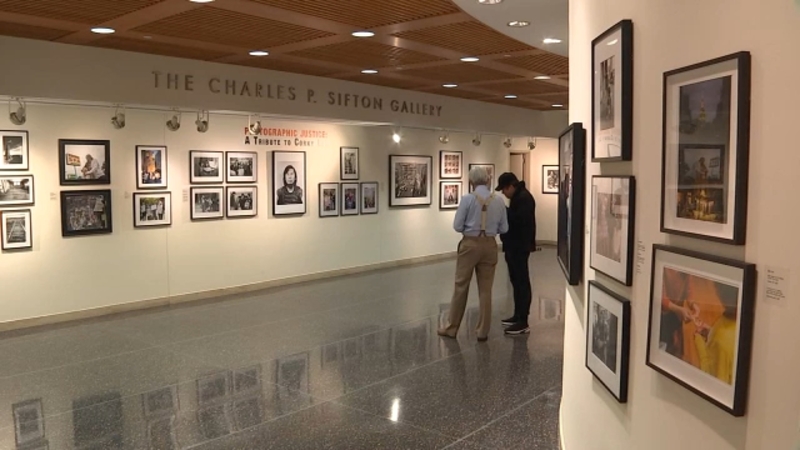 NEW YORK CITY (WABC) -- It is perhaps the most in-depth photographic collection of every consequential moment in Asian American history captured by an icon who is no longer with us.

"Photographic Justice: A Tribute to Corky Lee Photo Exhibit" is on display inside the U.S. District Courthouse in Downtown Brooklyn.

Lee would often say his camera was his sword to combat racial injustice, and the exhibit features work by 31 other photographers all influenced by him, all carrying on his legacy.

"Look at what this young boy wrote," curator Chee Wang Ng said. "'Racism has happened to me so much, I just don't listen to it anymore.' And guess what, this was in the 80s. And guess what, it's still relevant today."

For AANHPI Heritage Month we spotlight the Bangladeshi community, which plays an important role in the city yet is taken advantage of in so many ways.

After Vincent Chin was beaten to death in a racially motivated hate crime by two white Detroit auto workers in 1982 who incorrectly assumed Chin was of Japanese descent, it was Lee who captured a mother's anguish.

"The humanity in each of us will say, why is this woman grieving," Wang Ng said.

A photo of railroad workers that erased Chinese workers from history sparked his fire.

"He wanted to let the world know that people of color, people of Asian descent, we were here and we are here," his brother, Johann Lee, said. "And together, if you don't know what we've done with you or for you, how can we build a better nation?"

Corky Lee passed in January of 2021 from COVID complications.

It's suspected he became ill from patrolling with neighborhood watch groups, protecting Chinatown from anti-Asian violence.

"My dad, he had this penchant for giving the kids heroic names," Johann Lee said. "Corky's Chinese name...loosely translates to 'Raise The Nation.'"

The exhibition runs until November.