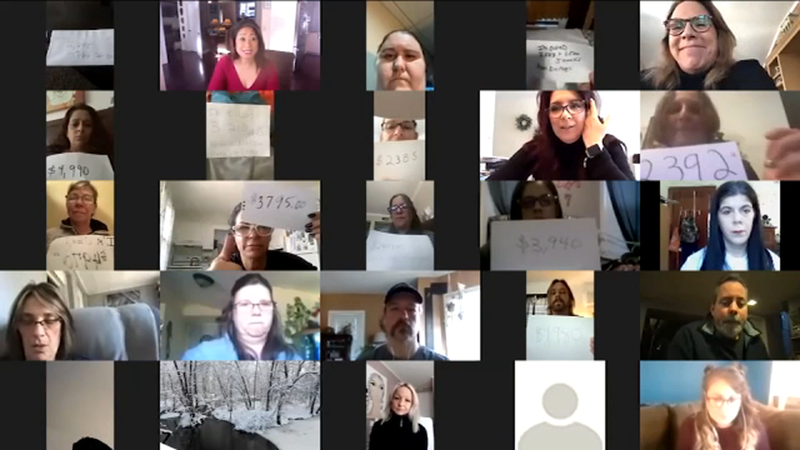 NEW JERSEY (WABC) -- Tens of thousands of people in New Jersey are still waiting for unemployment benefits -- more than a month after they should have been paid out.

Nearly 200 New Jersey residents vented to 7 On Your Side.

"I'm a mess because I don't have nothing," said Bayonne resident Anette Guagliardo.

"We are in the process of selling our car to buy diapers for our daughter," said new mom Savannah Krout.

"I don't know how we are paying our mortgage for February 1st," said Kristen Lopez, as she choked back tears.

Everyone that spoke to 7 On Your Side is an unhappy member of a trio of Facebook groups critical of New Jersey's Department of Labor.

The groups are 53,000 members strong and many say they are owed at least five weeks of unemployment benefits.

But behind the numbing numbers are heartbreaking stories.

Brian Denegri lost his job as a plumber.

"I'm currently living in a motel because I lost my apartment," Denegri said.

Guagliardo has been out of work nearly a year after bartending at a catering hall. Only support from her mom helped keep her head above water.

"All my savings are depleted, I don't have a dollar," Guagliardo said.

Lopez's family is struggling to pay the mortgage.

"We need answers - we need communication to plan, I have exhausted all my resources," Lopez said.

New Jersey's Department of Labor says more than 75,000 residents - about 5% of all claimants - had their unemployment benefits run out after December 26.

A day later, then-President Trump signed the second stimulus bill authorizing 11 more weeks of unemployment, plus an additional $300 per week-- federal money to be distributed by states.

"They say they're on top of it, but they are not," said unemployment recipient Joanne.

And when they try to call the New Jersey Department of Labor, Kristin Baum said, "you could talk to five different people, they give you five different answers."

The Department of Labor has blamed the feds and said states were not given adequate time to reprogram their systems.

On Tuesday, 7 On Your Side asked New Jersey Gov. Phil Murphy how New York and Connecticut were both able to pay out extended benefits without a delay, while New Jersey still has yet to pay weeks of benefits.

"I'd put our record up against any state right now, either the past year during the crisis, the COVID crisis, or as a general matter 96-plus percent of the people who are eligible have at least received a first payment," he said.

But neither Murphy nor the New Jersey Department of Labor could give any specific timeline on when benefits would be paid out.

"I hope the answer is soon," Murphy said. "I'd like to follow up with you and get to the bottom of it again, I will. I'm not trying to make anybody feel better. If they haven't gotten their money, they'll get every penny that they're rightfully owed."

The governor's office promised to follow up on each individual's delays with the Department of Labor's Office of Constituent Relations.