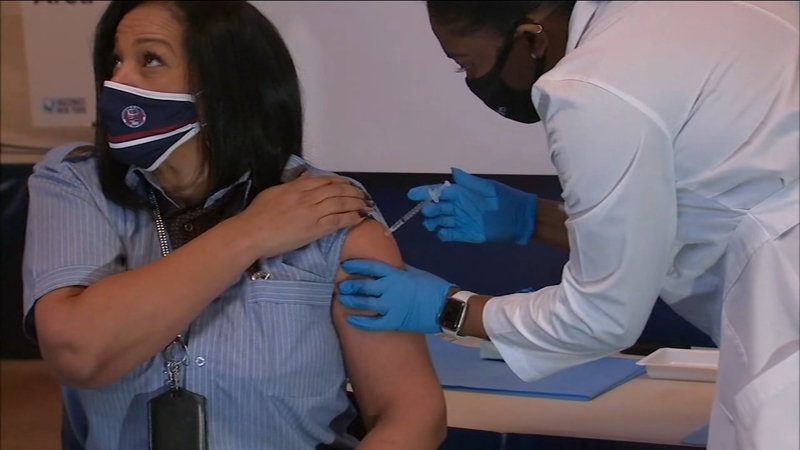 NEW YORK (WABC) -- Governor Andrew Cuomo announced that New York is expanding its vaccine eligibility to include individuals age 60 and above starting at 8 a.m. Wednesday.

Availability was previously limited to age 65 and up. Additionally, starting March 17, public-facing public employees will also become eligible for the vaccine.

A state official confirmed to Eyewitness News that postal workers are eligible for the vaccine under the new guidance.
EMBED More News Videos

The Centers for Disease Control said in December that postal workers should be included in the 1B vaccination category, but they were not in New York State -- until now.

"We've been out there since day one," USPS worker Nick Riggio said. "Postal service has not shut down."

Postal worker Bob Memoli said he's been frustrated by the fact that he has not been eligible for the vaccine. He visits 150 businesses and 180 homes on his route in Farmingdale.

"There's nobody else that is going house-to-house, you know, and business-to- business that's dealing with more public than we do," he said. "I probably see more people a day than a doctor does."

Still, people that have been eligible for weeks to get the vaccine are still unable to get an appointment.

"I keep going online. I'm always a day late and a dollar short," said Wyandanch resident Keith Gholson, who is over 65.

"Make an appointment starting tomorrow 8 a.m., remember it's still uneven, we still don't have enough supply, but do your best," Cuomo said. "I know it requires patience. But 60-year-olds start tomorrow. Next week, March 17, all sites can administer vaccines to any eligible population except pharmacies. Pharmacies will only be doing 60-plus and teachers. Also, next Wednesday, March 17, the everyday heroes, the essential workers, YWCA, essential workers, will be eligible for the vaccine."

The decision comes as vaccine production continues to ramp up, and New York City is receiving an additional 5,000 doses this week. That number is expected to rise, and Mayor Bill de Blasio has insisted the system can handle far more than that.

And with additional vaccine on the way, the MTA opened another vaccination center for its employees, this one in Grand Central. Metro North conductor Amy Thomas was among the first to receive the shot.

"For me, it's important because I'll be able to see my parents, and I haven't been able to see them," she said. "They live literally 14 blocks away from me, and I've seen them two times in the past year. And I'm very excited, the first people I texted. As soon as I got the shot, I texted my parents, 'Your baby's got the first one!'"

Meantime, Mayor de Blasio announced that the city is hiring 2,000 vaccine center workers from within the neighborhoods of 33 task force locations.

Big victory: This is a major part of @NYCMayor’s push for freedom to vaccinate.

Glad the State has changed their tune on this. https://t.co/DCPx7z4MkM

Members of the media were not included specifically in the next round of essential workers eligible for the vaccine.

Cuomo said he spoke with officials in the White House on Tuesday to request more vaccines for New York State.

He said he was informed the vaccine supply will not increase throughout the next two weeks, but should dramatically increase the last week of March into early April.

Find out if you are eligible and where you can go to get your vaccine
Do you have coronavirus symptoms?
Where to get tested in New York, New Jersey and Connecticut
WATCH: Eyewitness to a Pandemic
Centers for Disease Control and Prevention on coronavirus