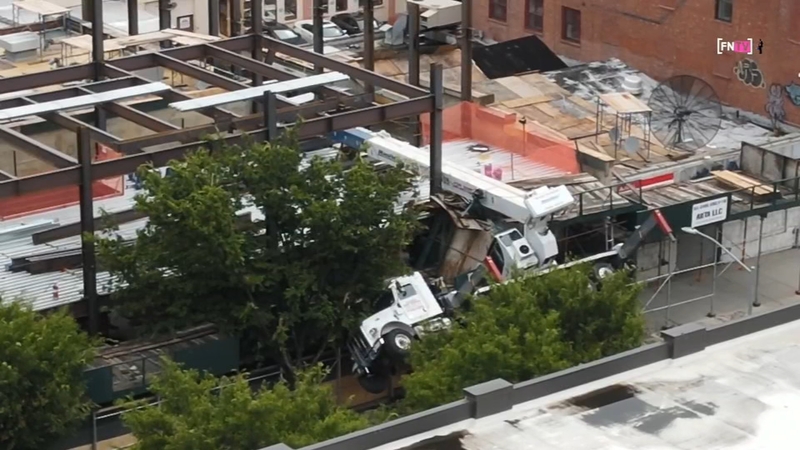 ASTORIA, Queens (WABC) -- A crane at a Queens construction site toppled onto its side Friday, leaning against and forcing the evacuation of an adjacent building.

It happened around 9 a.m. on 36th Avenue in Astoria.

The Department of Buildings says the commercial boom truck was at a new building under construction at the time.

NJ Burkett has the latest on the charges handed down to the Trump Organization and its chief financial officer Allen Weisselberg.

There were no injuries reported, including the crane operator, but the building was evacuated as a precaution.

The boom was extended at the time, and it crashed into offices behind the construction site.

"I was working in my office back here, sitting at my desk...and all the sudden, I heard 'Boom,'" said David Konsker, of Konsker Electric Corp. "Got up from the desk, and I saw some debris fall from my ceiling. Went around, looked up, saw a crane on the roof."

The ceiling was cracked open, and debris was everywhere -- even scattered across his secretary's desk

"I heard a loud bang, came over, came further up the block, and I saw this thing laying on the side," he said.

The operator managed to escape his shattered cab, and the workers inside the site were not injured.

Investigators from the city Department of Buildings joined federal OSHA agents to determine the cause of the accident, where workers are building a nine-story mixed-use commercial tower.

As larger cranes were brought in to clear the toppled crane, workers at an industrial laundry next door struggled to handle the backlog after being forced to evacuate.

ALSO READ | Man with Alzheimer's forgot he was married, fell in love with his wife all over again
EMBED More News Videos

Peter looked at Lisa and asked if she would marry him. What Peter didn't remember was that they were already married.

Craig Levy is the co-owner of Red Cap Valet, which handles laundry for many of New York's five star hotels.

"Business has been suspended almost all day, and I got clients that are waiting on their garments," he said. "We've been evacuating the building on and off, and we're going to have to step outside again. And the biggest problem is that clients that are waiting on they're garments. We're doing the best we can to service them, but I sure hope that this will go away quickly."

The preliminary investigation at the scene determined that the boom truck was attempting to set up a column at the rear of the site, when the truck tipped over and leaned against the sidewalk shed and under construction building.

The cause of this incident remains under investigation.