Governor Cuomo: President Trump will 'need an army' if he returns to New York City 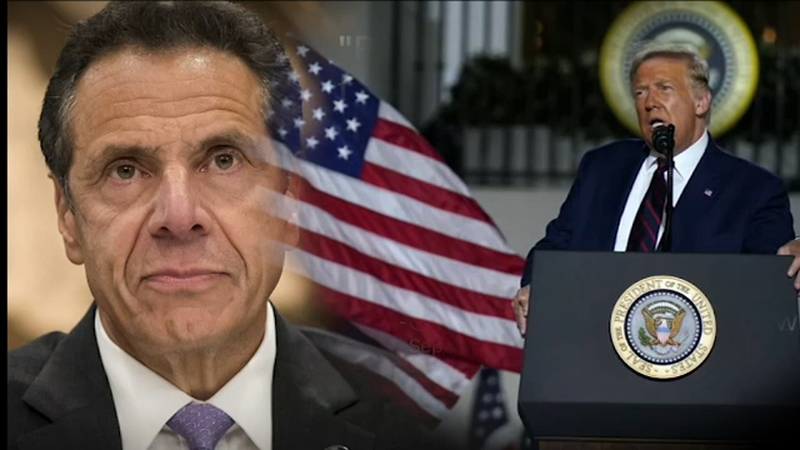 Cuomo: Trump will 'need an army' if he returns to NYC

President Trump came out firing Thursday in response to the governor's criticism of his handling of the coronavirus in the country.

Governors Andrew Cuomo of New York has the worst record on death and China Virus. 11,000 people alone died in Nursing Homes because of his incompetence!

.@NYGovCuomo should get his puppet New York prosecutors, who have been illegally after me and my family for years, to investigate his incompetent handling of the China Virus, and all of the deaths caused by this incompetence. It is at minimum a Nursing Home Scandal - 11,000 DEAD!

"He's been tweeting up a storm," Cuomo said on Thursday, going on to call Trump a bully. "You can't bully New Yorkers. We just don't get bullied. We don't respond well to it."

Governor Andrew Cuomo fired back at the president's claims that he did a bad job handling the coronavirus pandemic for New York.

The president said his administration "will do everything in its power to prevent weak mayors and lawless cities from taking federal dollars while they let anarchists harm people, burn buildings, and ruin lives and businesses."

My Administration will do everything in its power to prevent weak mayors and lawless cities from taking Federal dollars while they let anarchists harm people, burn buildings, and ruin lives and businesses. We’re putting them on notice today. @RussVought45

The five-page memo obtained by ABC News orders all federal agencies to send reports to the White House Office of Management and Budget that lay out funds that can be redirected.

Cuomo says everything Trump could do in his power to hurt New York City, he has done.
EMBED More News Videos

In a scathing statement, Gov. Andrew Cuomo said from the point of view of NYC, President Donald Trump is the worst president in history amid reports he is threatening to defund the city.

Cuomo and Trump are both originally from Queens.

The governor says with President Trump has no chance of winning his native state.
EMBED More News Videos

Mike Marza has the latest on Governor Cuomo and President Trump's fight over threats to defund New York City.

"How much do you want to wager that you will win New York?" said Cuomo, adding that he would take any bet and told the president to put his money where his mouth is. "The people who know him the most, like him the least."

"As far as this statement he's going to stop funding for New York City, he is not a king, he thinks he's a king but he's not, he's a president and there is a constitution and there are laws, nothing that he knows anything about but the federal budget is appropriated by law with conditions of funding by law," Cuomo said. "The statutes contain the funding conditions and he can't override the law. I suspect it's more of a political statement that he's making than anything else."

Cuomo said what the president is talking about is also illegal.

"It makes no sense. By the way, your words don't carry much weight on this topic because the Supreme Court has spoken. The President of United States can't interfere with federal funding for cities and states just because he feels like it. We have laws in this country. So if you persist and trying to deny the funding, we will see you in court. And once again, we will beat you in court," de Blasio said.

"The reality is that legitimate protests turned into riots and violence and the democrats refused to say that until the last two days. It hit them between the eyes before they said anything," King said. "It's important we stand with the police, realize the police are the ones that defend us and defend and protect all lives. As far as the president, what he wants to do, I say, is to make sure the money that goes to the cities is spent properly. We can't be defunding cops, has to spending money the right way, and if president is putting pressure on the mayor and governor to do the right thing, so be it."