AP
By BY KEVIN FREKING and JONATHAN LEMIRE 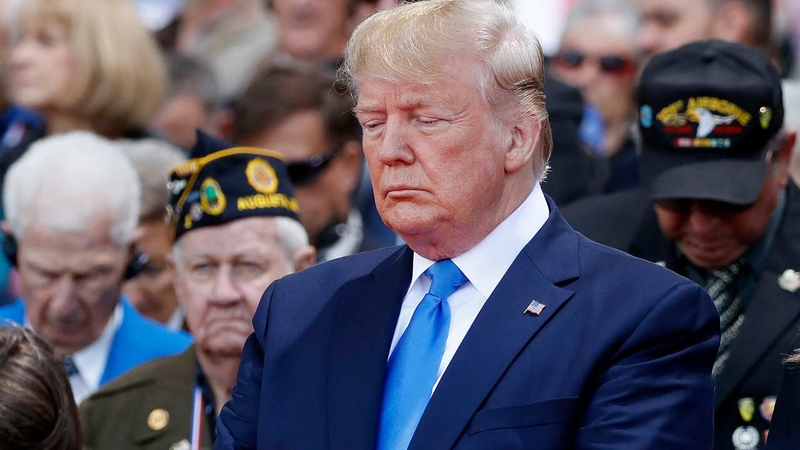 COLLEVILLE-SUR-MER, France -- On a bluff overlooking Omaha Beach, President Donald Trump on Thursday lauded the heroism of American and Allied service members who participated in the D-Day invasion, saying they "they came wave after wave without question, without hesitation and without complaint."

Trump joined other world leaders at Normandy American Cemetery in France to honor those who died and participated in the battle. Trump also sought to assure allies skittish about relying on the U.S. under his "America first" brand of leadership.

"To all of our friends and partners - our cherished alliance was forged in the heat of battle, tested in the trials of war, and proven in the blessings of peace. Our bond is unbreakable," the president said.

World leaders dwelled on the alliances that were needed to pull off a feat like D-Day. Trump also praised allies for their past work, saying "the full violence of Nazi fury was no match for the full grandeur of British pride." He also credited the Canadians and the French, along with "the fighting Poles, the tough Norwegians, and the intrepid Aussies."

Under blue skies far quieter than those streaked by gunfire exactly 75 years ago, Trump described the 130,000 service members who took part in the D-Day landing from boat as the "citizens of free and independent nations, united by their duty to their compatriots and to millions yet unborn."

He paid particular attention to the few surviving members of that day who likely are witnessing their final remembrance of arguably the world's most famous battle, singling out a few by telling their personal stories. He described D-Day participants as "among the very greatest Americans who will ever live."

"Those who fought here won a future for our nation. They won the survival of our civilization and they showed us the way to love, cherish and defend our way of life for many centuries to come," Trump said.

What has often been described as America's "greatest generation" was no less extraordinary in peace, Trump said, crediting them for building a "national culture that inspired the entire world."

Trump was joined by French President Emmanuel Macron, who told American D-Day veterans that "France doesn't forget" what they sacrificed for his country's liberty from Nazi Germany.

"We know what we owe to you veterans: our freedom," Macron said. "On behalf of my nation, I just want to say, thank you."

Trump, who participated in a D-Day commemoration in Portsmouth, England , on Wednesday, said in France that America's veterans are the pride of the U.S.

After the program and a gun salute, Trump, Macron and their wives walked to an overlook above Omaha Beach, the scene of the bloodiest fighting. They stood silently as a bugler played "Taps" and surveyed a map of the invasion. They also watched as fighter jets and other aircraft, including some that streaked the sky with red, white and blue smoke, flew overhead. At the cemetery, Melania Trump placed a bouquet of white flowers at the base of a cross-shaped headstone.

Trump and Macron then traveled separately to Caen, France, for a meeting and lunch before Trump returns to his golf course in Ireland.

Trump reflected on the commemoration as he sat with Macron and explained that guides had described how D-Day was executed. He said he was struck by the high death toll as the initial waves of troops came ashore.

"It's a lot of courage, and a lot of heartbreak, but an incredible victory," Trump said.

In his speech, the president said Americans of all stripes are drawn to the shores of Normandy "as though it were a part of our very soul." Many of the men who lost their lives here "ran through the fires of hell, moved by a force no weapon could destroy - the fierce patriotism of a free, proud and sovereign people."

The cemetery contains grave markers for more than 9,300 American servicemen. Trump noted that each marker has been adopted by a French family and that people come from all over France to "look after our boys."