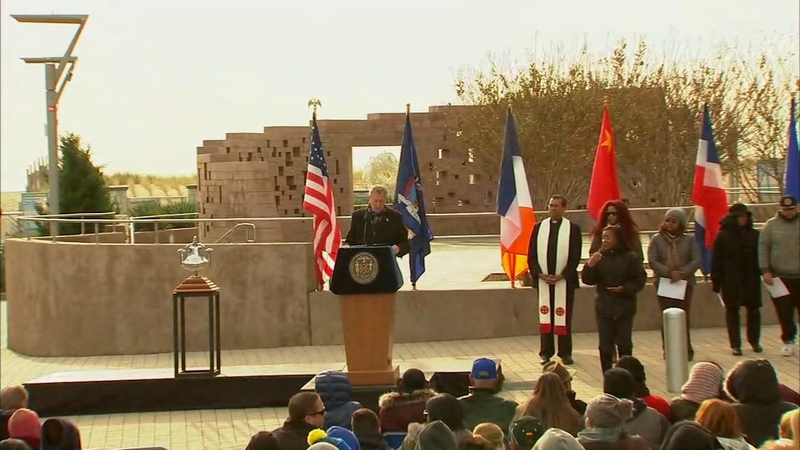 BELLE HARBOR, Queens (WABC) -- A special tribute was held Sunday to remember the victims of Flight 587, 16 years after the plane crashed into Belle Harbor, Queens.

An annual memorial service was held at Flight 587 Memorial Park in Rockaway Park.

"To everyone who 16 years later still I'm sure feels lonely sometimes, I want to say to you the city of New York is here with you today and we will be here with you tomorrow. We will be with you always," said the mayor.

De Blasio said the renaming of an intersection in the Belle Harbor neighborhood where the plane crashed as "Flight 587 Way" was a powerful message.

He says relatives of the 265 people who were killed recommended the renaming last year.

The American Airlines flight heading to the Dominican Republic crashed on November 12th 2001, shortly after taking off from JFK airport.

All 260 people on board and 5 people on the ground died.

The accident will be forever linked to 9/11 because of its proximity in both time and distance to the disaster at the World Trade Center.
Belle Harbor, the suburban beach neighborhood where the plane went down, has been a longtime enclave of police officers, firefighters and financial district workers, and was still holding funerals for its 9/11 dead when the accident happened.

The hardest blow, though, came for New York City's large community of immigrants from the Dominican Republic. Flight 587 was bound for Santo Domingo when it went down.

Most of the passengers were Dominican. In some city neighborhoods, like Manhattan's Washington Heights, it seemed like everyone knew someone aboard the flight.
Investigators ultimately determined that the plane's tail had detached in midair because of stress put on the plane's rudder as the co-pilot tried to steady the aircraft in another jet's turbulent wake. Since then, steering systems for some airliners have been redesigned so pilots can have greater awareness of movements in the tail rudder.