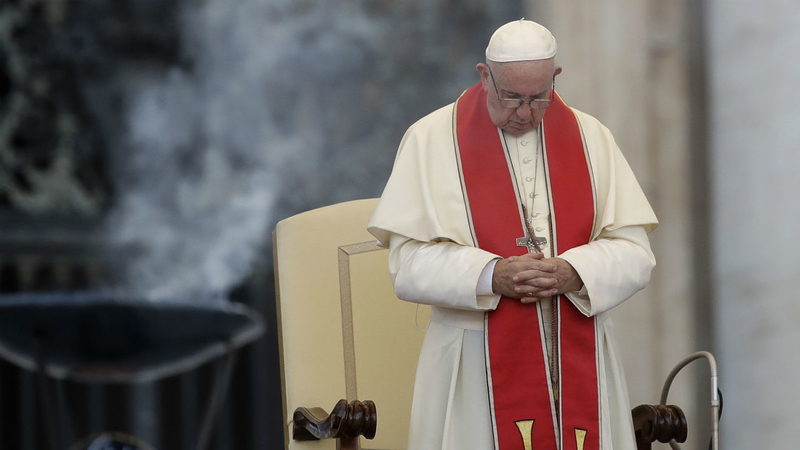 NEW YORK (WABC) -- New York Gov. Andrew Cuomo says he is showing solidarity with Pope Francis by pushing through a bill that would remove the death penalty from New York state law.

Pope Francis has decreed that the death penalty is "inadmissible" under all circumstances and that the Catholic Church must work to abolish it, changing official church teaching to reflect his view that all life is sacred and there is no justification for state-sponsored executions.

The Vatican said Francis had approved a change to the Catechism of the Catholic Church - the compilation of official Catholic teaching - to say that capital punishment constitutes an "attack" on the dignity of human beings.

Gov. Cuomo said the death penalty is an ugly stain on our history, is morally indefensible and has no place in the 21st century:

"Pope Francis's decision is a validation of my father's principled stand against the death penalty in the face of overwhelming support for capital punishment. My father staked his political career on his opposition to the death penalty and never backed down, saying it 'demeans those who strive to preserve human life and dignity.'

"As Governor, Mario Cuomo vetoed legislation reinstating the death penalty 12 times in 12 years. He did this because he believed the death penalty was wrong and he had the courage to stand firm in his beliefs -- so much so that he was willing to lose his office rather than capitulate. Pop was right then, and he is right now.

"The death penalty was reinstated in New York under the Pataki administration but halted by the courts in 2004. In his final years, my father continued to advocate for eliminating the law from the books, calling it a 'stain on our conscience.' Today, in solidarity with Pope Francis and in honor of my father, I will be advancing legislation to remove the death penalty -- and its ugly stain in our history -- from State law once and for all."

Previously, the catechism said the church didn't exclude recourse to capital punishment "if this is the only possible way of effectively defending human lives against the unjust aggressor." Previous popes have upheld that position, while urging an end to the practice.

The new teaching, contained in Catechism No. 2267, says the previous policy is outdated, that there are other ways to protect the common good, and that the church should instead commit itself to working to end capital punishment.

"Recourse to the death penalty on the part of legitimate authority, following a fair trial, was long considered an appropriate response to the gravity of certain crimes and an acceptable, albeit extreme means of safeguarding the common good," the new text reads.

It said today "there is an increasing awareness that the dignity of the person is not lost even after the commission of very serious crimes." New systems of detention and sanctions have been developed that don't deprive the guilty of the possibility of redemption, it added.

"Consequently, the church teaches, in the light of the Gospel, that the death penalty is inadmissible because it is an attack on the inviolability and dignity of the person and she works with determination for its abolition worldwide," reads the new text, which was approved in May but only published Thursday.

Francis has long railed against the death penalty, insisting it can never be justified, no matter how heinous the crime. He has also long made prison ministry a mainstay of his vocation and even opposes life sentences, which he has called "hidden" death sentences.

On nearly every foreign trip, Francis has visited with inmates to offer words of solidarity and hope, and he still stays in touch with a group of Argentine inmates he ministered to during his years as archbishop of Buenos Aires.

The death penalty has been abolished in most of Europe and South America, but it is still in use in the United States and in several countries in Asia, Africa and the Middle East. Just this week Turkish President Tayyip Erdogan said Turkey could soon move to reinstate the death penalty, which it had abolished in 2004 as part of its bid to join the European Union.

Cardinal Luis Ladaria, prefect of the Congregation for the Doctrine of the Faith, said the change aims to "give energy" to the anti-death penalty movement and "to encourage the creation of conditions that allow for the elimination of the death penalty where it is still in effect."

Francis is not alone. Perhaps the most famous Roman Catholic anti-death penalty campaigner is Sister Helen Prejean, whose book "Dead Man Walking" - about her spiritual ministry to a man on death row - helped fuel opposition in the U.S. to capital punishment.

In addition, plenty of Catholic organizations are active in the anti-death penalty campaign, including the Sant'Egidio Community, which together with Italian authorities always lights up Rome's Colosseum whenever a country abolishes capital punishment.

In a statement Thursday, Sant'Egidio said the change served "as another push to the church and Catholics, based on the Gospel, to respect the sacredness of human life and to work at all levels and on every continent to abolish this inhuman practice."

It was precisely Francis' citation of the Gospel, however, that sparked criticism from some on the Catholic right, who cited Scripture in arguing that Francis had no authority to change what previous popes taught.

"He is in open violation of the authority recognized to him. And no Catholic has any obligation of obedience to abuse of authority," tweeted the traditionalist blog Rorate Caeli.

Some on social media questioned the timing of the announcement, given that the Vatican and the Catholic Church is under extraordinary fire once again over clerical sex abuse and how bishops around the world covered it up for decades. The U.S. church, in particular, is reeling from accusations that one of the most prominent U.S. cardinals, Theodore McCarrick, allegedly abused minors as well as adult seminarians.

"Coming in the midst of the sex abuse revelations, the timing is curious... and more fury is not what the Church needs at this moment," noted Raymond Arroyo, host of the Catholic broadcaster EWTN.

Francis announced his intention to change church teaching on capital punishment in October, when he marked the 25th anniversary of the publication of the catechism itself. The catechism, first promulgated by St. John Paul II, gives Catholics an easy, go-to guide for church teaching on everything from the sacraments to sex.

At that 2017 ceremony, Francis said the death penalty violates the Gospel and amounts to the voluntary killing of a human life, which "is always sacred in the eyes of the creator."

He acknowledged that in the past even the Papal States had allowed this "extreme and inhuman recourse." But he said the Holy See had erred in allowing a mentality that was "more legalistic than Christian" and now knew better.

Amnesty International, which has long campaigned for a worldwide ban on the death penalty, welcomed the development as an "important step forward."

"Already in the past, the church had expressed its aversion to the death penalty, but with words that did not exclude ambiguities," said Riccardo Noury, Amnesty Italia spokesman. "Today they are saying it in an even clearer way."

In addition, he praised the clear indication of the church's commitment to the cause beyond doctrine.

"There seems to be also a desire to see the Catholic Church take an active role in the global abolitionist movement," he added.