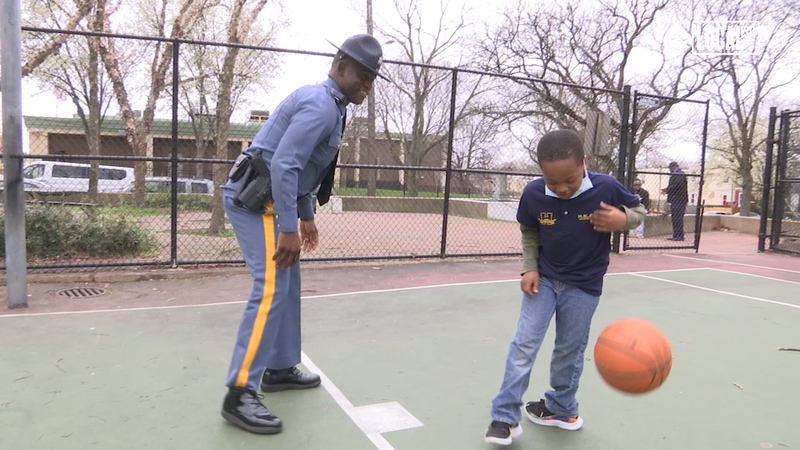 WILMINGTON, Delaware -- In a story we could all use more of, an Instagram video depicting the bond between a state trooper and a Wilmington fourth-grader went viral earlier this year.

In the video, posted by Delaware State Trooper Joshua Morris, you see him on the court up against other youth in the area who challenged him to a few games.

He says he was doing errands when kids recognized him and wanted to have some fun. But the other key player on the video is 9-year-old Ra'kir Allen, who is the commentator, cameraman, and Morris' number one fan.

"His charisma, his character, his natural organic joyness about him, I just loved," Trooper Morris said. "That reeks through his pores. I loved it."

Trooper Morris, who recently joined Delaware State Police after being on the force with the Wilmington Police Department, said he was instantaneously drawn to Ra'kir's spirit after being challenged to a few games a couple of days ago.

He said as someone in law enforcement it was important for him to follow up. But Trooper Morris went the extra mile by getting in touch with Ra'kir's mother and surprising him with Golden State Warrior star Stephen Curry's sneakers.

He got the idea after hearing the fourth-grader in the video constantly comparing him to Curry.

"I though it was so beautiful to see the reaction on his face," his mother Elveria Griffin of Wilmington shared.

Trooper Joshua Morris shared he got his masters in education and so he's naturally been drawn to children.

He also believes cops should never be strangers in the communities they serve. Morris said giving Ra'kir the sneakers means so much more.