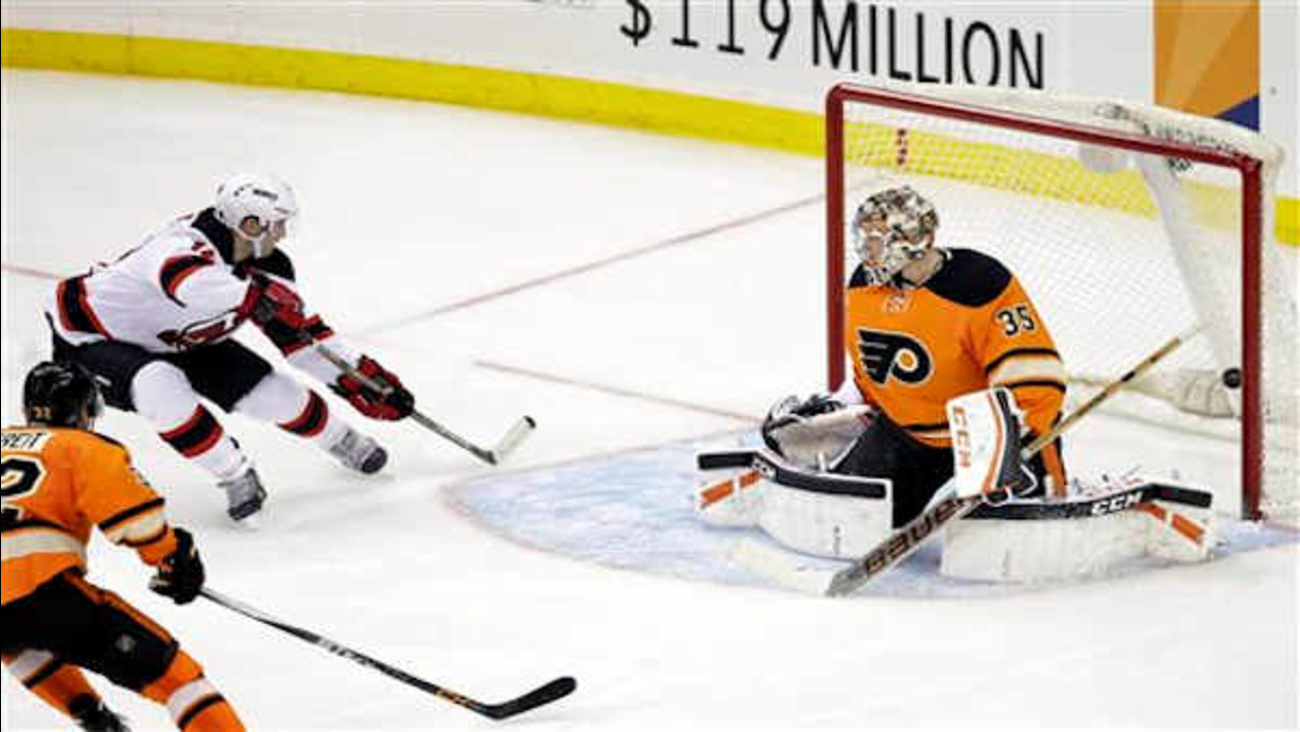 NEWARK -- Adam Henrique scored two goals and Keith Kinkaid had 25 saves in his return to the lineup to lead the New Jersey Devils to a 5-2 victory over the Philadelphia Flyers on Sunday night.

Jacob Josefson broke a second-period tie with a short-handed goal and defenseman Eric Gelinas added a power-play tally to help the Devils bounce back from a disappointing loss to Columbus and send the Flyers to their second loss in two days.

Stephen Gionta also scored and Steve Bernier added three assists in the game between teams whose playoff hopes are fading.

Ryan White and Michael Raffl scored for the Flyers, who did not seem at their best after blowing a late lead to Boston on Saturday before losing in overtime. Steve Mason had 16 saves.

The result left Philadelphia seven points behind Boston in the race for the final wild-card spot in the Eastern Conference. The Devils are 10 behind the Bruins, who have played two less games than the Flyers and one less than New Jersey.

The big goal for the Devils was Josefson's fourth of the season. With Devils' defenseman Adam Larsson off for hooking, defenseman Andy Greene sent a pass that Josefson carried into the Flyers zone and dropped to Gionta. Mason made the save on Gionta's shot but Josefson got the rebound and scored for a 2-1 lead.

Gelinas made it 3-1 late in the second period with a blast from the point that may have deflected off Pierre-Edouard Bellemare with 1:51 left in the period.

Henrique made it a three-goal lead with a 2-on-0 break with Bernier. Henrique carried the puck into the Flyers end, sent a pass to Bernier and slammed dunked the return pass into an open net.

Raffl got the Flyers to 4-2 with a short-handed goal with just over 8 minutes to play and Philadelphia nearly cut the margin to a goal a little more than a minute later but Sean Couturier could not finish a chance in front.

Seconds later, Patrik Elias sprung Gionta for a breakaway and he beat Mason for his fourth goal of the season.

NOTES: Scott Gomez had two assists and he now has 476 points as a Devil, tying him with Scott Niedermayer for fourth in team history. He also has 355 assists, moving past John MacLean for third in team history. ... The Devils took the season series 3-1. ... Flyers D Niklas Grossman missed his fourth straight game with an upper-body injury while fellow D Michael Del Zotto is expected to be sidelined 7-to-10 days with an upper-body injury. ... The Devils celebrated the 20th anniversary of their first Stanley Cup championship before the opening faceoff with most of the players and coaches from the squad being introduced.
Related topics:
sportsnew jersey devils
Copyright © 2022 by The Associated Press. All Rights Reserved.
TOP STORIES
3rd family member dies from injuries in NJ crash
Husband of 'One Tree Hill' star, dead at 33 after lightning strike
3 men killed in violent night across NYC
Mississippi teen jumps into river to rescue 3 girls, officer
Woman struck by bullet while walking down street in Queens
Suspected parade shooter's dad speaks, says son raised with 'morals'
Beloved New Jersey deli to close after 120 years in business
Show More
Griner pleads guilty to drug charges in Russian court
Reward offered, Hochul meets with faith leaders after NY mosque arson
AccuWeather: Not as warm
Man convicted in NYPD friendly-fire death gets 30 to life
NY nurse who got 1st COVID shot in US to be awarded Medal of Freedom
More TOP STORIES News