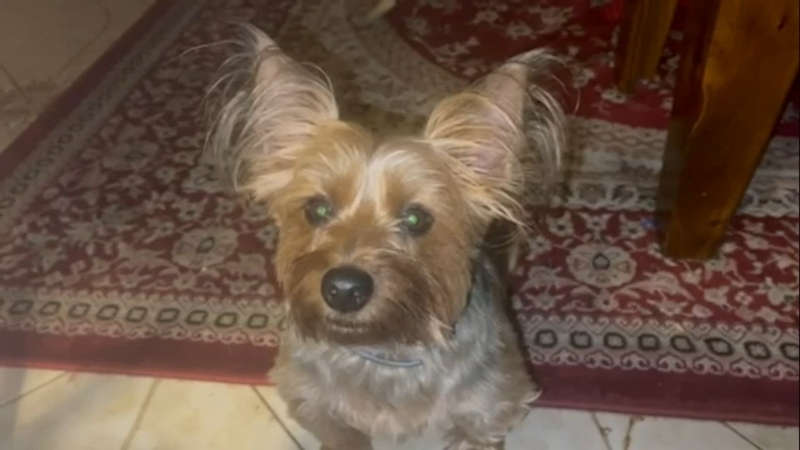 SPARTA, New Jersey (WABC) -- For the second time this month, a bear has attacked and killed a dog in one New Jersey town.

Police in Sparta say a 5-year-old Yorkie named Tommy died after his owner let him out into the backyard Wednesday night.

"He was never deprived from being on the couch, in the bed at night, sleeping with us, everything," owner William Pierce said. "He was part of the family."

Pierce said Tommy didn't return when he was called, raising their alarm.

"It was devastating," he said. "I was asleep on the couch when he went out. He didn't come back when he was called, and I went outside. I was outside about a half an hour, 45 minutes before I found him."

He found his beloved dog laying mortally wounded by the wood line.

He brought Tommy to the animal hospital, but they were unable to save him due to his injuries.

There were claw marks on the dog's side, which caused internal injury and ultimately led to his death.

A responding officer confirmed the bear tracks and blood, which led into the woods. He was unable to locate any bear at that time.

"I've been a hunter all my life, and when you go deer hunting, you're allowed to take so many deer a year, and they do that to control the population," he said. "And with Governor (Phil) Murphy banning the bear hunt, it's created more problems."

The New Jersey Department of Environmental Protection's Division of Fish and Wildlife was notified and is conducting a follow up investigation into the attack, and pet owners are on notice of potential dangers.

This is the second time in as many weeks where a resident's pet dog has been killed by a bear, though it is unknown at this time if it is the same bear that is responsible for these attacks. It is, however, in the same area that a bear may consider its range.

Earlier this month, an 81-year-old woman was hurt when she tried to get between two black bears and her dogs.

The victim had taken out the trash and let her dogs out, and that's when the dogs went after the bears, which were going through the garbage.

One dog was killed, while the woman suffered wounds to her right leg and a scratch on her head that may have been a result of falling.

Bears are usually in hibernation this time of year, but it appears a warm December has kept them out longer -- and they can become aggressive when provoked.

The DEP reminds the public that while bear attacks on people are extremely rare, these are large, powerful wild animals, and interactions with them must be avoided for public safety and the well-being of the animals.

The DEP reminds the public of the following steps they can to take to reduce the risk of encounters with black bears:
--Never feed or approach a bear.
--Remain calm if you encounter a bear. Do not run from it.
--Make the bear aware of your presence by speaking in an assertive voice, singing, clapping your hands, or making other noises.
--Make sure the bear has an escape route.
--If a bear enters your home, provide it with an escape route by propping all doors open.
--Avoid direct eye contact, which may be perceived by a bear as a challenge. Never run from a bear. Instead, slowly back away.
--To scare the bear away, make loud noises by yelling, banging pots and pans or using an airhorn. Make yourself look as big as possible by waving your arms. If you are with someone else, stand close together with your arms raised above your head.
--The bear may utter a series of huffs, make popping jaw sounds by snapping its jaws and swat the ground. These are warning signs that you are too close. Slowly back away, avoid direct eye contact and do not run.
--If a bear stands on its hind legs or moves closer, it may be trying to get a better view or detect scents in the air. It is usually not a threatening behavior.
--Black bears will sometimes "bluff charge" when cornered, threatened or attempting to steal food. Stand your ground, avoid direct eye contact, then slowly back away and do not run.
--If the bear does not leave, move to a secure area.
--Report black bear damage or nuisance behavior to the DEP's 24-hour, toll-free hotline at 1-877-WARN DEP (1-877-927-6337).
--Families who live in areas frequented by black bears should have a "Bear Plan" in place for children, with an escape route and planned use of whistles and air horns.
--Use certified bear-resistant garbage containers and keep the container outdoors if you live in an area frequented by black bears. Certified bear-resistant trash containers have passed a formal testing procedure and are proven to keep bears out. Certified containers offer the best protection.

A pair of roving alpacas went on an adventure through various neighborhoods Saturday morning when they escaped their enclosure in Oakland.