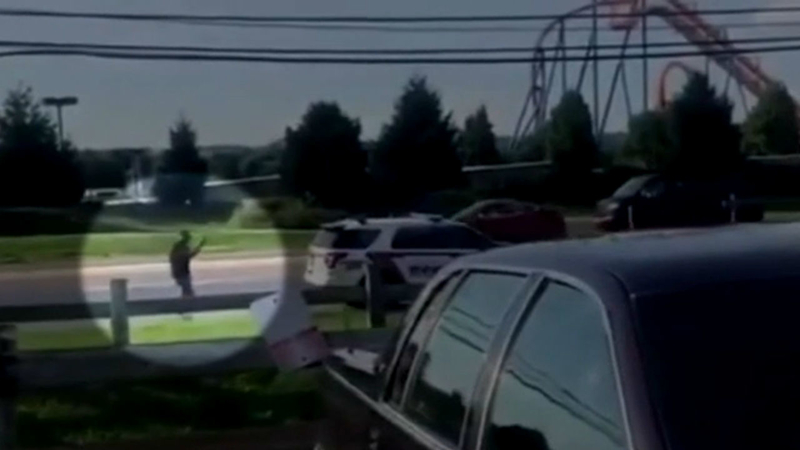 The shooting happened on July 28 along Hamilton Boulevard (Route 222) near the Dorney Park and Wildwater Kingdom amusement park in the Lehigh Valley.

Witnesses said and video showed 44-year-old Joseph Santos darting into traffic and jumping onto cars across the street from the popular amusement park.

District Attorney Jim Martin said when Officer Jonathan Roselle arrived on the scene, Santos banged on the car and jumped on the hood.

Roselle radioed to report the incident and issued numerous commands to get off the vehicle and step away, officials said.

The man walked away from the officer's vehicle but then turned around back towards the officer.

The officer had exited his vehicle and kept telling Santos to get on the ground, Martin explained.

"The man did not comply, but continued to walk toward the officer. As the man drew nearer, the officer discharged his duty weapon five times," Martin said.

Officer Roselle has been charged with voluntary manslaughter in the shooting that killed Santos.

A South Whitehall police officer has been charged with voluntary manslaughter

Roselle surrendered prior to the charges being announced.

His son was among those questioning whether the shooting was justified.


Rodriguez remembers what his father told him just before Santos and his current girlfriend headed out to Dorney Park.

But according to police, Santos was acting erratically by breaking car windows and causing damage. At one point, he was told to get down on the ground but never followed that command.

There is no evidence that Santos had a weapon, officials said.

Martin said they do not believe this shooting was racially motivated, but the actions of an inexperienced officer.

"To those who believe or contend that the death of Mr. Santos was either the result of police brutality or that racism was involved, this investigation has disclosed no facts which would support those contentions," said Martin. "In my opinion this was the act of a relatively inexperienced officer who held a subjective fear for his own safety."

Roselle had only been on patrol for five months after graduating from the police academy in December. The prosecutor noted that he had other options to subdue Santos, including pepper spray and a taser but instead he fired his gun, a decision the officer told several people he regretted.

The family of Santos called for justice. "We will have justice for Joey. As long as we have air in our lungs we will fight for Joey," said his wife Arlene Figueroa. "He didn't deserve this. We're not going to leave this like this, please, justice for Joey."

Santos leaves behind three children, including an 8-year-old girl who still hasn't been told of her father's death.