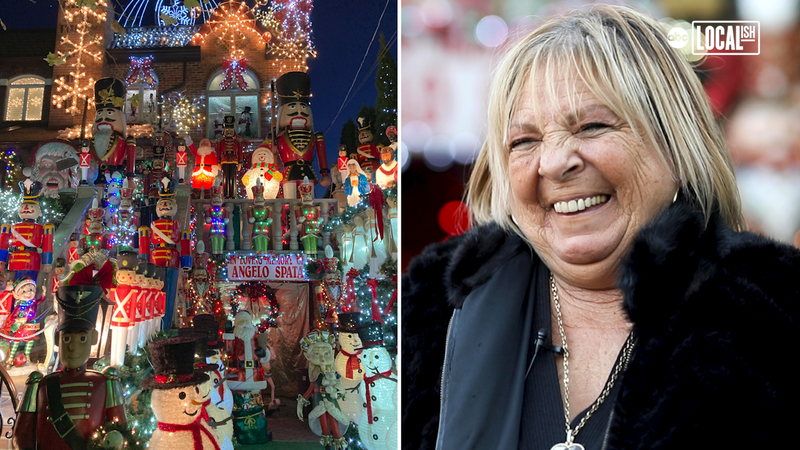 DYKER HEIGHTS, Brooklyn -- It's hard to believe there was a time when Brooklyn's Dyker Heights neighborhood was not chockablock with scores of houses adorned with elaborate Christmas decorations and dazzling light displays.

Lucy Spata remembers these dark ages all too well. She and her husband, Angelo, moved here in 1986 and were disappointed by how plain their neighbors' homes were during the holidays.

So they decided to do something about it.

"There were no decorations at all on this block. And Christmas means a lot to me because I come from a family that has always decorated for Christmas," Lucy Spata said. "So I had said to my husband, 'what do we do?' So we decorated not as much as this but for here, it was a lot. The following year, I went bigger. I did it for my mother to keep her memory alive. And now it means much more to me because two years ago I lost my husband."

Today, she's the area's "Queen of Christmas," and her kingdom of holiday cheer in Kings County is Dyker Heights. The Christmas decorations in the neighborhood have become a major tourist attraction. You can find homes decked out from 83rd and 86th streets, between 11th and 13th avenues.

Her husband had her promise that she would continue their tradition after his death, and she has kept her word.

"It's a beautiful tradition. And that's what makes me keep him alive," she said.

Con Edison might well be the biggest fan of these displays, given the high cost of electricity, but that's besides the point. This is about holiday cheer, which is priceless.

Explains Spata: "Everybody thinks, 'oh my God, the electric bill.' It's really a matter of six hours on a timer and the LEDs and no matter what the cost is, it's only for 30 days. And then most of it goes into my storage. And my basement, my garage behind the tree in my backyard. In my closet. They're all over the place."

Even as the neighborhood brightens up every December, Spata has contemplated scaling back at her home on 84th Street, but then she thinks of the children.

"You can't, because this is their house. If you take your child to Rockefeller Center, they sell toys, they have the chestnuts, a lot of people cant afford it".