Chinatown mall that once employed thousands at risk of shutting down 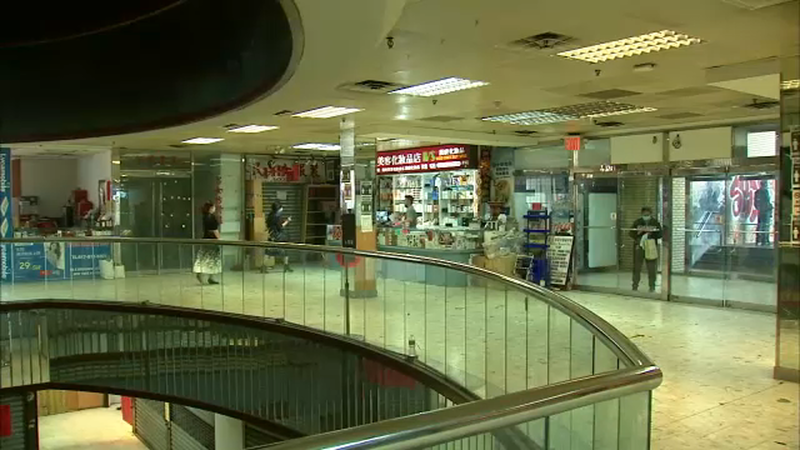 Chinatown mall that once employed thousands at risk of shutting down

CHINATOWN, Manhattan (WABC) -- A mall that used to employ thousands of workers in Chinatown is at risk of shutting down for good.

Most of the stores inside the mall are already shuttered due to the pandemic, but the operator says if the city wanted to save it, it could.

Under the rumble of the Manhattan Bridge is vibrant activity in the heart of Chinatown. and at the center of it all is the East Broadway Mall -- the oldest and largest in Chinatown.

It is teeming with life on the outside, but on the inside, it's been slowly marching to an all but certain death.

"Before the pandemic this whole first floor was pretty much occupied," said GM Terry Chan. "Now it's decimated from the pandemic."

Chan said his family family was one of the original developers invested in the property and he says it is going downhill with no help from the city.

He said they once had about 80 mom-and-pop tenants, but now there are only 17 tenants left.

"So we have a lot of tenants who are being lured to across the street because if there are vacancies, they just jump over there," he said.

So Chan has been begging the city for a tax deal that would keep his mall competitive.

The East Broadway Mall was the first of its kind when it opened in the late '80s. Its operator say it's what revitalized Chinatown.

Now they fear, like so much of Chinatown, it will be gone -- unable to survive the pandemic, taxes, and gentrification.

In statement, a spokesperson for the Department of Citywide Administrative Services said:

The spokesperson went on to say that the current operator has neglected the site and failed to pay rent, and now owes the city $13 million.

They added that under a new operator, the city will prioritize retaining current tenants.

The city says the operator has been unable to meet its financial obligations for decades.

Chan says in 2011 they had a zero balance with the city.

The restaurant on the second floor can seat a thousand. Chan says he has potential tenants right now willing to invest about $5 million in the space, but not at the current property tax rate.

"It's really sad because this place employed about 80 to 90 people," Chan said. "So you think about all the families that lost their jobs because of the taxes and the pandemic. I mean I don't know what these families are doing out there."