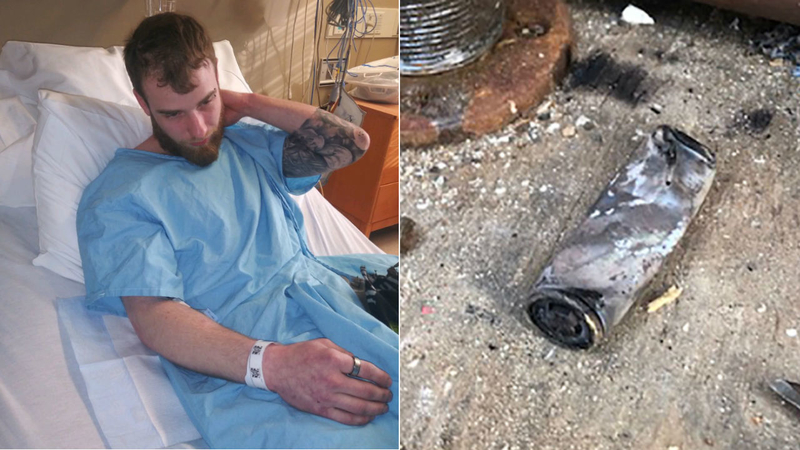 Larchmont police responded to Pryer Lane around 8:30 a.m. to a report of a man with severe burns.

The victim, 27-year-old Jacob Dudhnath, had just arrived at a job when the spare battery in his pocket burst into flames.

"All I knew was I had a fire in my pants, and it kept moving down," he told Eyewitness News from his hospital bed at Westchester Medical Center. "And it just kept getting hotter, so we just worked on getting it off of me as quickly as possible."

Co-workers said his pants were on fire and had to be ripped off him.

"There was about a 2-foot flame shooting out of his pants, burned his whole leg from his hip below the knee," co-worker Kevin Carrelli said. "He falls straight on his back, and he starts rolling trying to get it out. I ran over and just started ripping his pants off, just trying to get it out. And I burned my hand in the process, but it could have been much worse for me."

Dudhnath and Carelli work for a plumbing and heating company and had just arrived at the home in Larchmont to begin some repair work. They were in the driver when the battery exploded, leaving burn marks on the asphalt.

"It was pretty scary," Carelli said. "I had no idea what was happening. I just see a flame and him rolling on the ground, and I have no idea what to think."

Dudhnath, a married father of a 6-month-old son, was rushed to the hospital for treatment. He also thinks his days of vaping may be over.

"I believe so," he said. "I'm pretty sure my wife is going to make me stop after this."