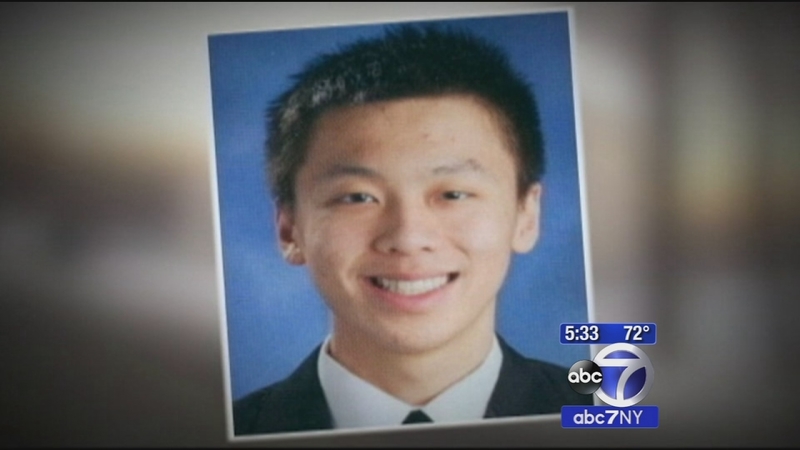 POCONO PINES, Pa. (WABC) -- Five men who allegedly took part in or failed to stop a brutal fraternity hazing ritual that killed a New York City college student were arraigned on murder charges Thursday, identified by police as the most culpable of 37 suspects in the case.

A judge Thursday set bail at $500,000 for four of the defendants and $150,000 for the fifth. All but one was posting bond Thursday afternoon.

The five are charged with third-degree murder, assault, lying to police and hazing in the 2013 death of Chun "Michael" Deng. All are from Queens.

Authorities maintained the five played the largest role in what happened, either watched and did nothing as Deng slowly died, or were the ones who delivered what ended up being fatal blows to the already dazed and confused 19-year old.

Deng attended Baruch College and was a pledge at the Pi Delta Psi fraternity. Police say he was assaulted by fraternity brothers at a rented home in the Pocono Mountains.

The suspects allegedly took part in a severe ritual. A group of pledges, while blindfolded and wearing backpacks filled with 30 pounds of sand, were allegedly tackled and repeatedly hit.

Deng was a pledge and passed out during the alleged attack.

He died a day later.

No one called 911. Instead, authorities say, the frat brothers carried Deng inside and after some time, drove him to the hospital where he died.

Several attorneys for the defendants argued in court this should not be a murder case.

"These are college kids, kids from Queens mostly," said attorney Steven Brill. "No criminal record, no history of violence, great schools, great families. So the fact that the judge feels that they cleaned themselves up for today is wrong. They were always cleaned up. And these are young men and the last thing that they expected to happen or wanted to happen was the death of a friend and a brother in their fraternity."

Thirty-two other suspects face less serious charges. All have been suspended from the fraternity.

The Pi Delta Psi fraternity is also charged with murder.