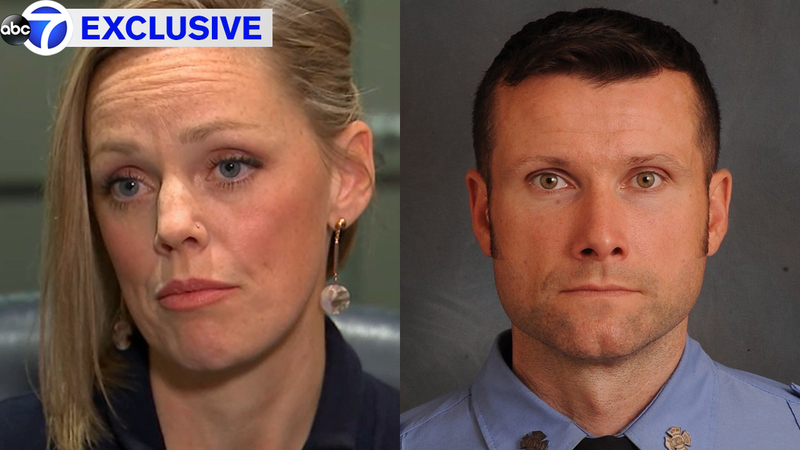 GARDEN CITY, Long Island (WABC) -- The widow of a New York City firefighter who died battling a blaze on a Harlem movie set is speaking out exclusively to Eyewitness News.

Eileen Davidson is pushing for change, saying her husband Michael Davidson didn't have to die in the March 2018 fire on the set of "Motherless Brooklyn."

"We so desperately wish we could change what has happened," she said. "We can't. So what we can do is make a change."

She and her brother-in-law Eric say there are no laws governing adaptations to buildings during filming, so if something goes wrong, firefighters have to grope their way past windows that are covered up and fake walls and partitions.

"Unfortunately that night, my brother had no idea what he was going into, and it essentially was a death trap," Eric Davidson said.

Michael Davidson, 37, got separated from his fellow firefighters and fought through dense smoke as the air in his tank ran out. He hit the talk button on his radio but never said anything.

The investigation found that plywood walls created as part of the set concealed the size of the fire, and the polyurethane foam used in the set's upholstery generated large quantities of dense black smoke.

"I mean, my oldest was only 7. When she lost him. My youngest was 1," Eileen Davidson said. "They're going to have a really hard time remembering their father, and I want to show them for their daddy, and for our family. It wasn't just about the tragedy that cannot define us. You know, we want to honor Michael and live and move forward in a way that would make him proud."

She has filed a lawsuit against the city, claiming they had inspected and issued permits to film at the building "despite knowledge and awareness of open violations at the aforesaid premises." In addition, she says "the city was aware of alterations in the premises, the inoperability of the sprinkler system and the addition of flammable and combustible materials to the premises as a result of the movie production."

Michael Davidson was appointed as a firefighter in May of 2003 and assigned to Engine Company 69 in Harlem. His father was a firefighter for 26 years, and they worked in the same firehouse until his father retired.

Eric Davidson is also an 11-year veteran, of Engine Company 88 in the Bronx.

"We're putting legislation in to protect firefighters and police officers and the citizens of this city when there's a film company that comes in to do film production or any rigging to a building or any filming location," he said. "So we're trying to get to a point where, if there's a some open violations on a building, they need to be cleared before you get a permit to do any filming. And also we're trying to get to a point where we could have a 24 hour fire safety director on scene for any filming that is done in the city to combat against any potential violations...and also any alterations made to the building."