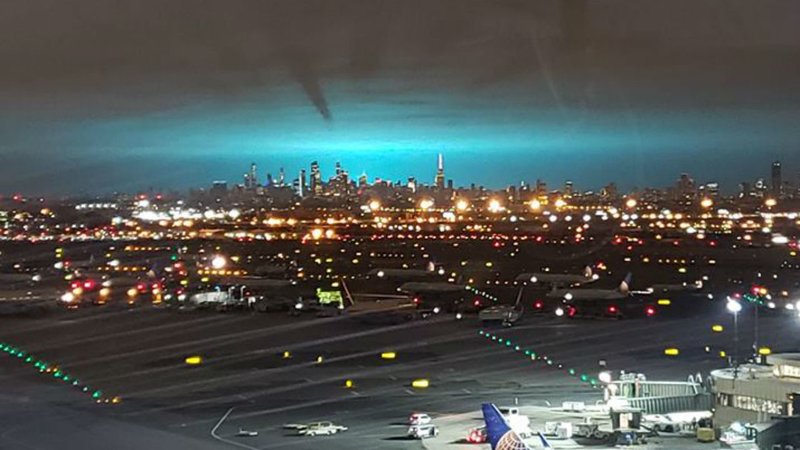 It happened shortly after 9 p.m. at the Astoria East and North Queens Con Edison plant on 20th Avenue and 32nd Street in Astoria.

Initially thought to be a transformer explosion, Con Ed issued a statement on Friday morning explaining what happened:

"An electrical fault on a section of 138,000-volt equipment in one of our Astoria substations caused a transmission disturbance and a sustained electrical arc flash, creating the blue light people witnessed. The equipment that malfunctioned is associated with voltage monitoring within the substation."

An electric arc is defined as "a visible plasma discharge between two electrodes that is caused by electrical current ionizing gasses in the air." Electric arcs occur in nature in the form of lightning.

The equipment, which malfunctioned is supposed to monitor voltage, was somehow damaged and allowed that voltage to escape instead.

Looks like a transformer at the Con Ed plant blew. Fire seems to be out now. Is everyone ok? pic.twitter.com/lydIkhYMy5

Within minutes of the incident, fire officials said they were fielding numerous calls for reports of explosions in the Long Island City and Astoria areas.

Despite those initial reports, Con Ed says there was no explosion and no electrical fire. Any fire that might have occurred was out before FDNY arrived on the scene, officials said.

The diversion of power did cause a transmission dip, which decreased the substation's voltage to 7% of normal output, disrupting its regular distribution of power.

Small customers like local houses would likely not have noticed outside of flickering lights, but for large customers like LaGuardia Airport, the transit system, and Rikers Island, the power decrease resulted in what was effectively an outage.

Laguardia and Rikers both switched to their on-site backup generators, but there was likely a delay in the transfer, which made it seem like the facilities had lost power.

At LaGuardia, that meant a ground stop was put into effect for about a half-hour but disrupted operations for hours. Among other issues, passengers on planes had to disembark and be re-screened per protocols.

At Rikers, which houses about 10,000 inmates, the temporary loss of power affected the facility's steam production system, resulting in a loss of heat and hot water in some buildings. That appears to be largely rectified, although correction department is working on more information

Service on the subway system's 7 line in Queens was also impacted for about 30 minutes while track equipment was reset. Some other customer electrical equipment also shut off and had to be reset.

The blue sky over the city also lit up the city's 911 system with calls.

"A half hour before the transformer explosion, there were about five-hundred 911 calls. In a half hour covering the explosion, more than thirty-two hundred 911 calls. All manner of calls: There was an explosion, some people thought it was a bomb, blue light in the sky, blackout conditions," NYPD Commissioner James O'Neill explained. "So we were on this as soon as it started."

People also flocked to social media to find out what happened and to share their views of the so-called "Astoria Borealis."

What is happening in queens?!!!! It’s humming and changing psychedelic colors... tons of sirens?!! pic.twitter.com/xkskHdzOxo

"It was pitch black outside and then suddenly the whole side of the eastern sky was lighting up and changing colors," said Madeleine Frank Reeves, who saw the lights from her Upper West Side apartment. "It lasted a couple of minutes."

"Something insane is happening in the sky above Manhattan right now," New York University sociologist Eric Klineberg wrote on Twitter under a video of the flashing sky.

New York Governor Cuomo addressed rumors of an "alien invasion" after visiting the Con Ed facility and seeing the damage for himself.

"I saw the equipment. I saw the damage. I saw what was burned. What it was is what it has been represented to be, which was an electrical malfunction," he said, and then held up what appeared to be an "alien" mask. "I'm told it's a piece of safety equipment for workers, which I believe. There's no truth to the alien invasion or alien UFO landing."

Contributing to all this, the cloud cover and general atmospheric conditions resulted in the incident refracting across the sky, turning it blue over a large region.

It is unclear how long the electrical arc flash was sustained, but it probably wasn't longer than a couple of minutes. Con Edison will analyze the oscilloscope data to figure that out. The root cause of the electrical fault remains under investigation, although it was likely a malfunction in the relay system. a spokesman said.

The utility will also reach out to its large customers (mostly businesses) to help identify any damage that may have been caused by the power turning completely off and then on again.

One Con Edison employee was nearby when the incident happened, but not injured.