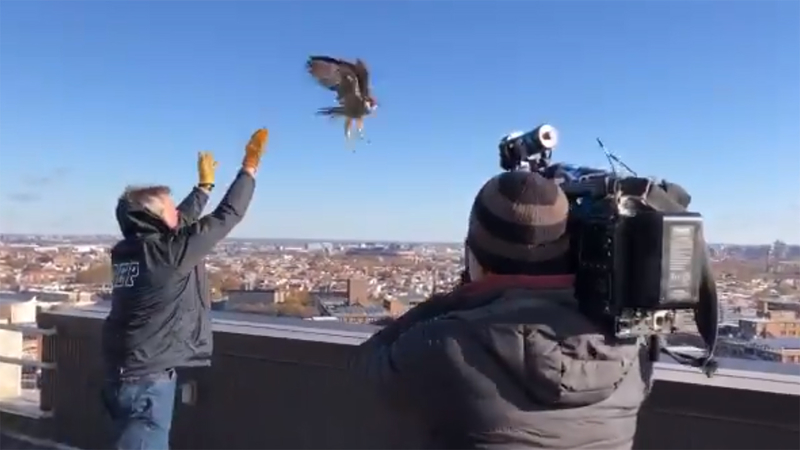 NEW YORK CITY (WABC) -- Two endangered and rare falcons that were rescued and nursed back to health have been set free, and Eyewitness News was there -- exclusively -- for the release.

The Peregrine Falcon is on New York State's endangered species list, but that may be about to change.

"The most important thing is you have to be very careful not injuring the bird or bending any of the flight feathers, the wing, or tailfeathers," New York City Department of Environmental Protection research scientist Christopher Nadareski said.

It is the world's fastest animal, but a 1-year-old Peregrine has been sitting in captivity for months after being found injured and immobile in a Lower Manhattan parking garage.

"She was bruised up, but nothing serious," Nadareski said.

And 20 stories above ground on a cold windy morning, Nadareski showed us how months of rehabilitation led up to one amazing moment.

#exclusive only Eyewitness News was there as two rehabilitated endangered peregrine falcons were released back into the wild — high above New York City. An amazing moment! We’ll see you at noon. #abc7NY pic.twitter.com/kkQ6y45ObC

The falcons were released back into the wild, returning to their place atop the food chain.

"And I'm only picking my finger up on the upper mandible (jawbone/beak)," Nadareski said. "There's a little tooth right behind the hook and a little notch on the lower mandible, but it slides into, it's kind of like a severing device."

When people think of New York City, wild birds may not be the first thing that pops into their head. But you may be surprised at just how many call this dense urban jungle home.

"We have approximately 25 pair of nesting Peregrine Falcon in the five boroughs," Nadareski said. "We boast the highest concentration of anywhere in the world with the Peregrine Falcon with this close nesting proximity...25% of New York City is green, between city parks state parks and federal park land."

Aggressive pesticide use after World War II once landed the predator on the federal endangered species list, and in New York, it's still considered endangered.

Wildlife rehabilitators are trying to get these powerful birds off that list and back in flight.