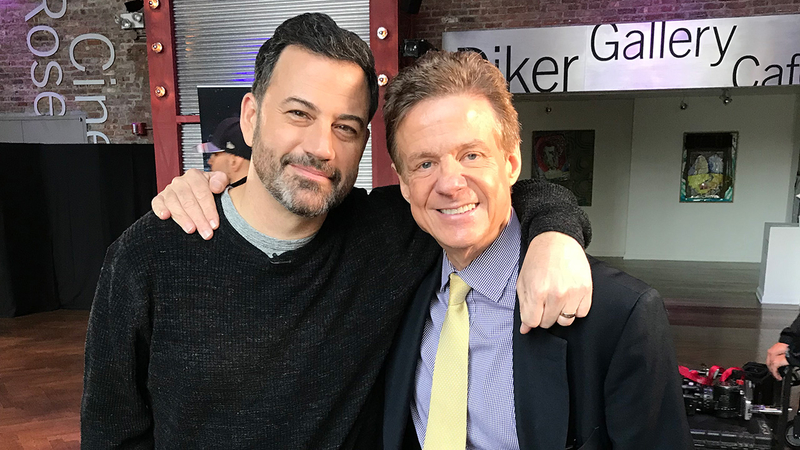 Going back to Brooklyn is all about making "Jimmy Kimmel Live" bigger and better for his hometown crowd.

"It's a bigger audience, so the show is different," he said during rehearsals at The Brooklyn Academy of Music. "It's more intimate in LA, with the smaller audience and an audience that really doesn't care that much that I'm there. So when we're here, we like to do some big live performances and live comedy bits. We like to have a lot of stars. We want to make sure these people who stand in line, a lot of times in the rain, once a hurricane, are entertained when they come here."

In an extended interview with entertainment reporter Sandy Kenyon, Jimmy Kimmel fills us in on his "Back to Brooklyn" show.

Entertainers -- like Cardi B -- find themselves on the same program as political star Alexandria Ocasio-Cortez, who is running for Congress.

"It's great to have them on together," Kimmel said. "And I always find when I have guests who seem very different together, that they have a lot more in common than anyone would imagine."

Another common denominator is food, which has become a big part of this road trip.

"(I) didn't eat dinner for like four or five nights in a row leading up to here," he said.

One promo features him with sidekick Guillermo urging fans to, "Come watch us eat our weight in hero sandwiches."

Much of the food he will eat this week is sent by fans.

"Nobody even calls, it just shows up," Kimmel said. "And usually, there's a note. And then I eat it."
Kimmel left his childhood home in Mill Basin at the age of 9 and moved to Las Vegas, but he used to return to Brooklyn every summer for three weeks to a month.

"We'd take the bus, because I guess my parents didn't want to pay for a plane ticket," he said. "So we'd take three days on a Greyhound bus to get here, which was nightmarish. Usually, I'd be with my grandparents."

It's a journey recalled on a trip back home for a week's worth of shows.

"Friday, typically, I do get a little emotional looking out and thinking about just the fact, you know, I grew up not too far from here," he said. "And the idea that something like this would happen, it's not something I ever imagined."

As the old saying goes: "You can take the boy out of Brooklyn, but you can't take Brooklyn out of the boy."