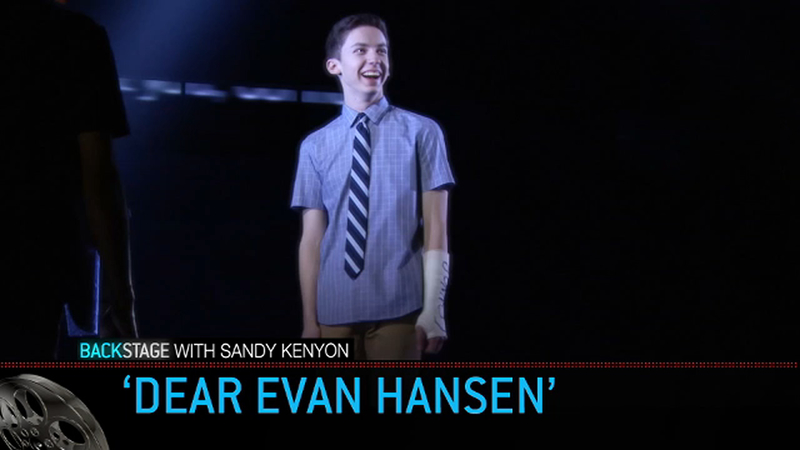 And the fact that Andrew Barth Feldman is just 16 years old makes the entire production even more meaningful.

"There's so much suspension of disbelief that we need to do as an audience when we go the theater, and I think seeing a kid playing the kid, it makes it easier to believe," he said. "If I'm doing my job, you can believe that this kid is going through where this story takes its course."

It's been called one of toughest roles on Broadway to sing, as Evan Hansen calls upon an actor to display a full range of emotions -- which is one reason why this teen character has been played by guys in their 20s...until now.

"I think it makes it really powerful and hopefully more heartbreaking to see an actual teenager go through the things that Evan goes through," he said.

It is a multi-million dollar production that rests on the slim shoulders of a 16-year-old boy.

"You know Evan when you see him," producer Stacey Mindich said. "He could be 16, he could be 28. And I saw Andrew at the Jimmy Awards (a competition for the nation's best high school performers). He was competing with high school kids. And I just thought, oh my goodness, there's our next Evan. And we brought him into the audition process, and the authors and Michael Greif, our director, agreed."

So how does Barth Feldman deal with the pressure?

"It's hard," he said. "It's really hard. And it completely gets to my head...The shocking thing with other people who saw the show and said to me, 'You're perfect for this.' So it sort of became this monument for me of one day, I want to play this role, and the goal was to audition for Broadway, but never did I ever think it would happen, or happen this soon. At all. Ever. So, yeah."

----------
* Follow us on YouTube
* More local news
* Send us a news tip
* Download the abc7NY app for breaking news alerts
Report a correction or typo
Related topics:
arts & entertainmententertainmentbackstage with sandy kenyontheatersandy kenyonbroadwayoriginals
Copyright © 2021 WABC-TV. All Rights Reserved.
BACKSTAGE WITH SANDY KENYON
Sandy sits down with Joy Behar and Susie Essmen
'Young People of the Pandemic' tells kids' stories in their own words
Grammy Museum offers podcast, free online programs amid pandemic
Backstage with Sandy Kenyon: Singer/songwriter Chloe Hennessee
TOP STORIES
NYC voters head to the polls, all eyes on mayoral race
What to know about voting in NYC's mayoral primary
NYC elections: What is ranked choice voting?
When will we know who wins NYC's mayoral primary? Maybe not until July
Here's why each of the 8 Democrats say they want to be mayor of NYC
AccuWeather: Rainy Tuesday after night of storm warnings
Man shot outside strip club in Queens
Show More
Trump Organization suing NYC over golf course in Bronx
Parents give update after young kids narrowly miss gunman's bullets
Investigation underway after balcony collapse in Brooklyn
Off-duty NYPD officer attacked with baseball bat in NYC assault
Child tax credit: Will you be getting monthly payments?
More TOP STORIES News