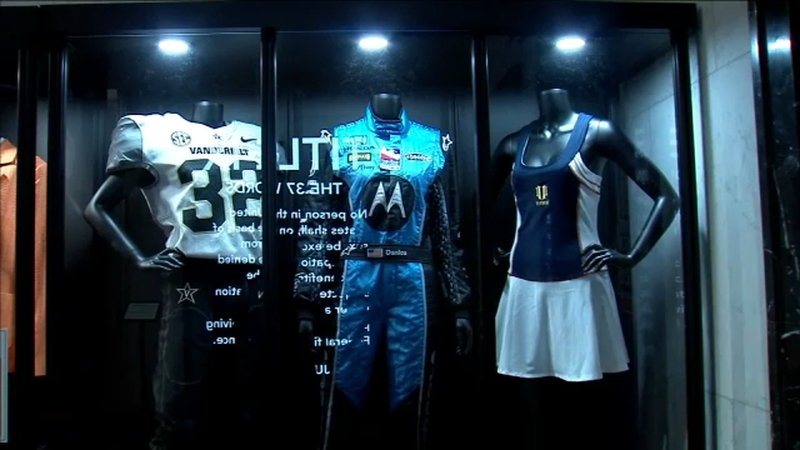 MIDTOWN, Manhattan (WABC) -- A brand new exhibit in New York City is honoring the landmark Title IX ruling that paved the way for a more equitable future for female athletes.

There are the 37 words that make up Title IX, the 1972 law aimed at leveling the playing field for women in sports.

It's the driving force behind a new exhibit at the Paley Center for Media in Midtown. It's called ESPN Fifty/50.

"It is the triumph and challenge that they stood with, and they kept going and made that impact that paved the way for so many of us, not just in women's sports but all fields," said Maureen Reidy, CEO of Paley Center for Media.

You get a full, rich picture of how legends both past and present made a difference. Like members of the Yale crew team.

In 1972, they boldly called a meeting with their athletic director and showed up naked, with only the words Title IX written on their bodies.

The women made sure a reporter and photographer were also there.

"That really paved the way for the implementation of Title IX because it had already passed," Reidy said.

The Norwegian beach handball team swapped out bikinis for tanks and shorts.

And unsung hero Wyomia Tyus was seen as a beacon of bravery, facing racism head one after the track and field sprinter wore dark colored shorts instead of the team issued white ones.

"Even most recently how thrilled were we to see the U.S. Soccer Federation's ruling and agreement on pay equality for both women and men's soccer teams," Reidy said.

In one part of the exhibit, there are athletic and historic pieces which span decades, including Billy Jean King's tennis racket from 1973.

The ESPN Fifty/50 exhibit in Manhattan rolled out the red carpet on Wednesday night, shedding light on the landmark Title IX ruling.

It also marked the world premiere of "37 Words," a four-part docuseries airing later this month.

It's all part of a month-long initiative across ESPN and Disney, looking back at this important part in our country's history.