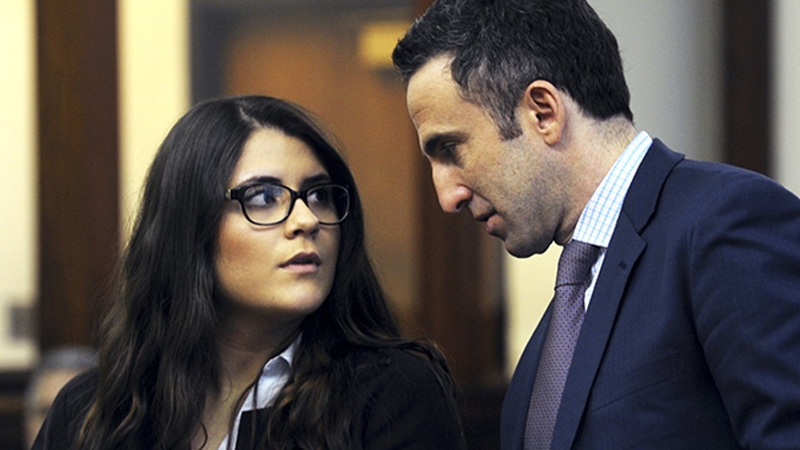 Nikki Yovino, of South Setauket, pleaded guilty to making up the allegations and was sentenced to three years in prison. She will only serve one year, though, with the other two suspended as part of the plea agreement.

She said she made up the allegations in 2016 because she worried her consensual encounter with the two players would damage her relationship with another student.

Yovino had initially claimed she was raped by the two students in a bathroom during an off-campus party.

Detectives believed her at first and had witness statements that seemed to corroborate her story, and it appeared the investigation was leading to charging the two students.

But then another student came forward and shed light on apparently explicit text messages between Yovino and the two male students, and one of the men had even captured part of the incident on his cell phone.

When the police confronted her with the evidence, she reportedly admitted she had made up allegations.

Yovino then dropped out of the university and returned home to Long Island.

Victim statements from both men were read in court prior to the sentencing, though only one was present. But the message was the same, that their lives have been forever changed by the accusations.

Malik St. Hilaire said his life has been a roller coaster since the incident and that he suffers from anxiety and PTSD.

"My life will never be the same." Victim who was falsely accused of rape speaks out during sentencing of Nikki Yovino. pic.twitter.com/h89FZezudj

Both withdrew from the school, and one lost his football scholarship over the incident.

Their lawyer said one of the things that made the case more difficult was how it all played out, with Yovino initially fighting the charges, then rejecting a plea deal before ultimately pleading guilty immediately prior to jury selection.

"It was a day that had to come," attorney Frank Riccio said. "It was a day that seemed like it would never get here, but they're happy it's finally come. They're happy that they've been vindicated. To a degree, their lives will never be the same. But at least this is some form of solace to them."