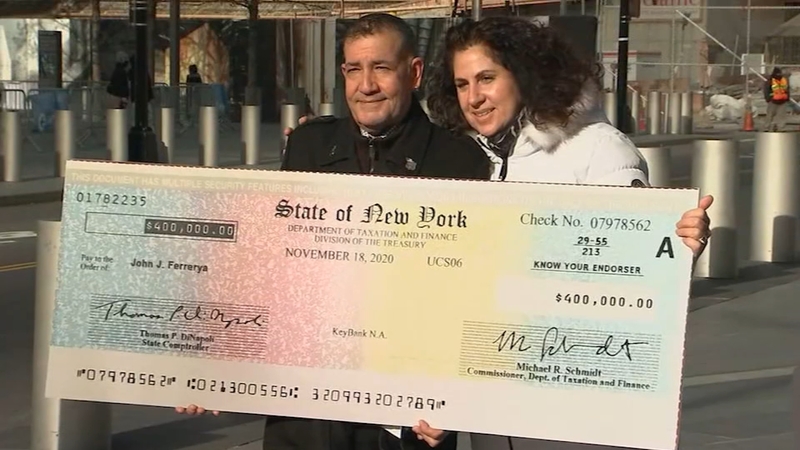 John Ferreyra was presented an oversized check from the fund, intended to protect legal consumers from dishonest conduct in the practice of law.

Ferreyra contracted non-Hodgkin's lymphoma as a result of his exposure to Ground Zero toxins and went through years of treatment, chemotherapy and radiation, surgeries, a stem cell transplant, and more.

"He was on death's door," wife Lisa McDermott said. "And then afterwards, when he was healthy, to have found out that that person stole that from us, it was just heartbreaking. We were heartbroken."

Ferreyra was awarded $1 million by the 9/11 Victims Compensation Fund, but most of that was stolen by disgraced attorney and ex-police officer Gustavo Vila, who has already pleaded guilty in federal court in October and is awaiting sentencing in January.

"For me, I wanted to hear him say the words," Ferreyra said. "I wanted him to plead guilty, say, 'Yes, I did this,' and admit his guilt."

Jim Dolan reports on the memorial ceremonies held on the 19th anniversary of the September 11th attacks.

Ferreyra's new attorney, Michael Barasch, who is representing him pro-bono, has represented over 20,000 9/11 first responders.

Barasch alerted the U.S. Attorney's Office to the crime and then helped secure the $400,000 compensation payment from the Lawyers Fund, which is supported by a fee imposed on all attorneys practicing in New York State.

"Despite the fact that lawyers sometimes have a terrible reputation, lawyers in New York state got together and put up the money for people like John," Barasch said.

Following the 9/11 attacks, Officer Ferreyra spent months working in Lower Manhattan. He hired Vila to file a federal Victim Compensation Fund claim on his behalf and was instead victimized.

Vila faces a maximum sentence of 10 years in prison. Ferreyra's new lawyers are still trying to recover the rest of the missing money.