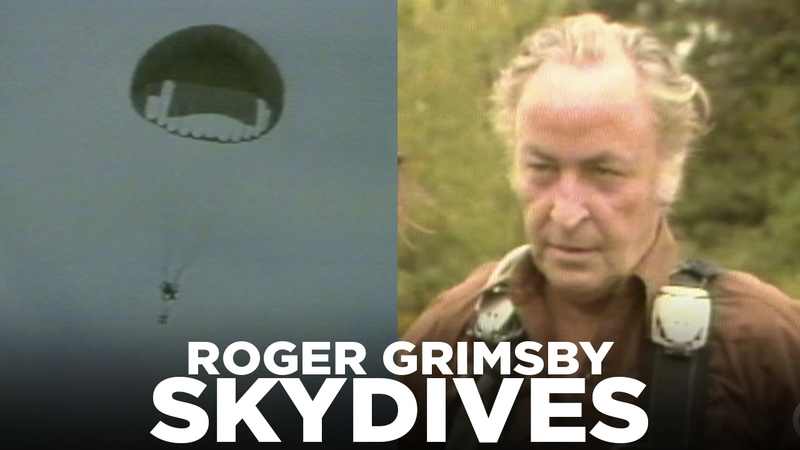 NEW YORK (WABC) -- Your lead anchorman should not be leaping from a plane in a daredevil stunt. But Roger Grimsby was not your typical anchorman.

You just never knew what Roger would say, or clearly in this case, do. Roger just couldn't stop himself, and joined a team of parachute enthusiasts who helped him take a flying leap from a plane near New Paltz, New York for this report that aired on Oct. 5, 1981.

Safely back at the anchor desk at 7 Lincoln Square, Roger decided to chide Bill about his reluctance to jump out a plane with him. And Bill's response to his taunts is a reminder of why these two were such a great anchor team, truly one for the ages.
Report a correction or typo
Related topics:
societynew york citynew paltzvault
Copyright © 2022 WABC-TV. All Rights Reserved.
TOP STORIES
14-year-old ID'd as person of interest in death of Kyahara Tay
Kidnapped CA teen found in NY thanks to quick-thinking detective
2nd racist incident at sports event between Nyack, Pearl River
Rihanna and A$AP Rocky welcome their first child
EMT released from hospital after being shot in ambulance by patient
Marshals arrest 116 alleged criminals in Operation Long Island Wave
MTA continues rebound, launches DineAWAY campaign to help restaurants
Show More
4 cases in NJ may be linked to nationwide acute hepatitis in kids
NY high court to determine if Bronx Zoo elephant is a person
AccuWeather: Warm west
Man walks at NYU graduation after bike crash left him in coma
Gas approaching $5 per gallon in NY as record prices persist
More TOP STORIES News