Farmer amputates own leg to escape equipment: 'The only way I'm getting out of here is to cut it off' 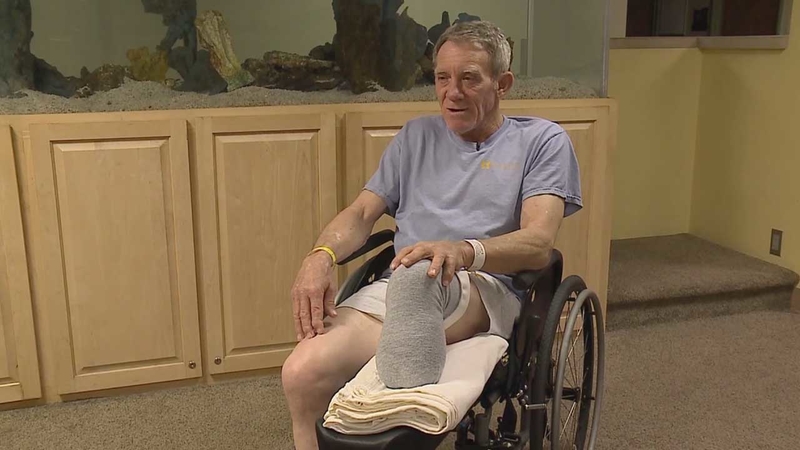 Farmer amputates own leg to save life

PENDER, Neb. -- After getting his leg stuck in some equipment, one farmer in Nebraska had to make a grueling decision to do the only thing he could think of to save his life: cut off the leg.

Kurt Kaser, a grain farmer of more than 40 years, told KETV that when he got stuck, his phone was out of reach and he was not expecting anyone else to be around for a while.

"I had my pocket knife in my pocket. I said, 'The only way I'm getting out of here is to cut it off,' so I just started sawing at it," he said.

Kaser, who was released from the rehabilitation center on Friday, replayed the whole harrowing ordeal for the ABC affiliate. He said he first got into the situation due to a split-second mistake while he was moving corn.

"Stepped into the hopper in the little hole. It just sucked my leg in and I was trying to pull it out, but it kept pulling," he said.

After he realized he was stuck, he ran through his options.

"I thought, 'How long am I going to stay conscious here?' I didn't know what to expect. I felt it jerk me again and I thought it would grab me and pull me in further," he said.

Kaser accepted that the only thing he had around to help him was his pocket knife, and he started cutting.

"When I was cutting it, the nerve endings, I could feel, like, the ping every time I sawed around that pipe, and all at once it went and it let me go and I got the heck out of there," Kaser said.

He then had to crawl 150 feet to get to a phone. He was transported to a hospital and, eventually, he had healed enough to begin occupational and physical therapy.

"He pretty much told me, his goal was, 'I need to get home and get back to what I was doing before,' and his main goal was farming," Willey told KETV.

Kaser's leg will need to fully heal before he can get a prosthetic leg.

"It is what it is," he said. "Make the best of it is all you can do. It could have always been worse."
Report a correction or typo
Related topics:
farming accidentu.s. & worldaccidentfarmingamputee
Copyright © 2022 WABC-TV. All Rights Reserved.
TOP STORIES
Flight delays ease up amid chaotic 4th of July weekend travel
1 killed, several injured in shooting at mechanic shop in NYC
Ex-boyfriend arraigned in murder of Upper East Side mom
AccuWeather: Less humid
Good Samaritan tries to save man seen jumping in Hudson River
Man found at Taylor Swift properties in NY faces stalking charges
Hard Rock deal ends casino strike threat in Atlantic City
Show More
Smoky 4-alarm fire breaks out in New Jersey building
Man shot in the head while riding scooter in the Bronx
3-year-old boy dies after falling from 29th-floor balcony in Manhattan
Where to watch 2022 Fourth of July fireworks
Macy's 4th of July Fireworks 2022: Everything to know
More TOP STORIES News