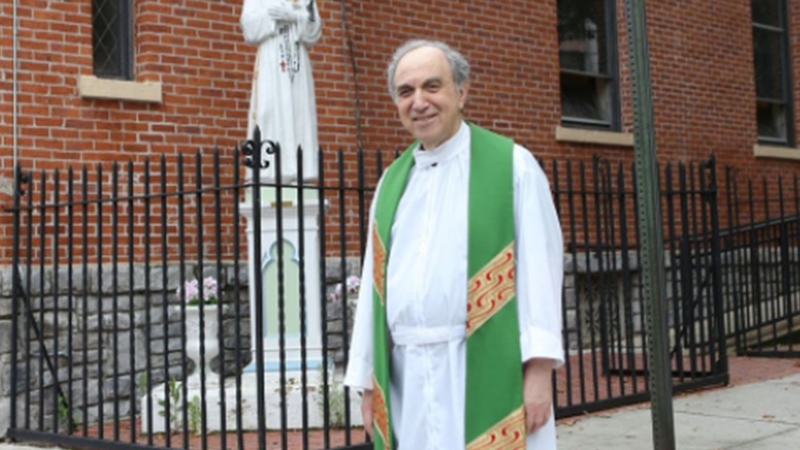 HOBOKEN, New Jersey (WABC) -- A beloved Hoboken priest and his sister were killed in a car crash in Freehold, New Jersey, on Sunday.

The car the priest was riding in was rear-ended by the driver of a pickup truck.

They don't name streets for just anybody.

In the City of Hoboken, Father Michael Guglielmelli sure was somebody.

At St. Francis of Assisi, where he served as the pastor for decades, congregants held on to each other as they digested the news.

The 81-year-old fixture of the town was in a violent car crash in Freehold Sunday night alongside his 87-year-old sister Dolores. Neither survived.

Matthew is their first cousin and grew up right next door to them, just around the corner from the church he would grow to lead.

"We can't get over this, I don't know how we're going to deal with it," Matthew said.

Neither do many of his parishioners, who streamed all night into the small church, laid flowers and, inside, lit candles for a man with a giant sense of humor for whom now they must grieve without him to tell them how.

"I think he would say above all forgive how this happened, find it in your heart to find strength, don't look to blame. Understand tragedy happens," said Christina LaBruno, a parishioner.

"He was ready to go to the Lord whenever the Lord wanted him. So we know that he's there now. So we have to accept that, it's just that we all needed him a little longer," said Diane Cappelluti, a friend.

This all happened just before 7 Sunday night in Freehold. Investigators say Father Mike and his sister were in a minivan, sitting at a red light when they were rear ended by another car.

Monmouth County prosecutors say so far there's no sign of criminality on the part of the teen who caused the crash, but the investigation continues.

At St. Francis, they're planning a special mass Tuesday evening to honor Father Mike.
Hoboken Mayor Dawn Zimmer also offered her condolences and order flags in the city to be flown at half-staff.

Funeral arrangements are pending and will be announced when they are formalized.