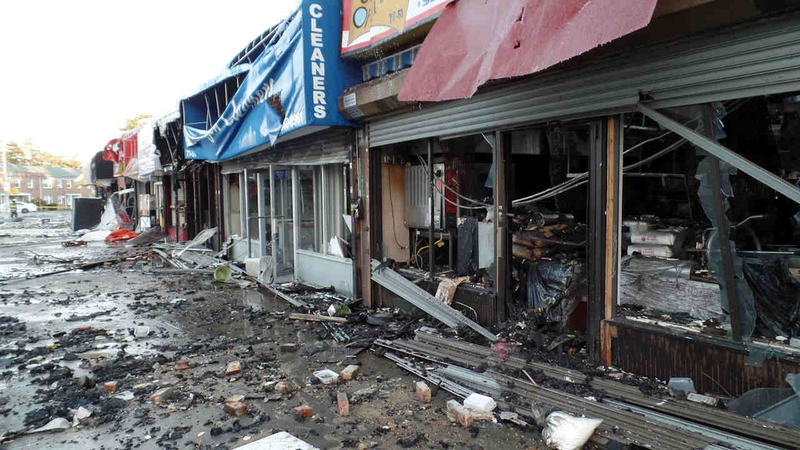 KEW GARDENS HILLS, Queens (WABC) -- The building that housed a row of businesses was condemned Saturday following a five-alarm fire in Queens.

The fire broke out just after 6:30 p.m. Friday on Vleigh Place in Kew Gardens Hills. At least 14 stores were affected.

The fire was under control by Saturday morning, but firefighters were still on the scene. It is unclear how the fire started.

A look at the aftermath:

The city Department of Buildings condemned the building Saturday afternoon, and store owners were told to retrieve their belongings, then vacate the premises.

John Macropoulos had a law office in the building.

"A lot of the stuff, hard drives that aren't backed up. You don't plan for this sometimes until it's too late. And I've been saying it over and over, let's back things up a little more," he said.

Macropoulos said he left his office minutes before flames broke out, and he said he smelled something familiar.

"It had an electrical burning smell but we looked everywhere and couldn't see smoke, didn't see fire," he said. "But we've smelled that before, because people have been working in the building, working downstairs so we paid it no mind. Then 10 minutes later we got a phone call."

Victor Borukhov, the owner of an appraisal company in the building, said, "The ceilings came down, everything is in water. You know so we just gotta try to take the towers and rebuild."

All Borukhov had left Saturday was a handful of files and a hard drive. "It's pretty bad. You know like we lost everything so if we ever get questioned by banks or anything or if we get audited we basically don't have that info," he said.

Millions of gallons of water were no match for the flames which consumed an entire block of businesses in a building that's withstood generations.

Firefighters said they arrived within three minutes after the first flames in the first storefront, but it was already too late to save it and 13 other businesses. A common roof is to blame for the fire's rapid spread.

"Once the fire gets into these concealed spaces up above the roof, it's almost impossible for us to put it out. We have to worry about the safety of our firefighters," said Chief of Department James Leonard, FDNY.

The response grew to a fifth alarm as firefighters attacked the inferno defensively, from the outside disappearing within a thick cloud of black, choking smoke.

At least three FDNY members were hurt, but none of them seriously.

"Here we are, it's a holiday weekend, and 14 people lose their business. Sometimes that's lost in the excitement of the fire, but 14 people. Think about all these business owners, people who work in these stores, and even the impact on the neighborhood, for all these people who shop in these stores, that's the real tragedy," Leonard said.