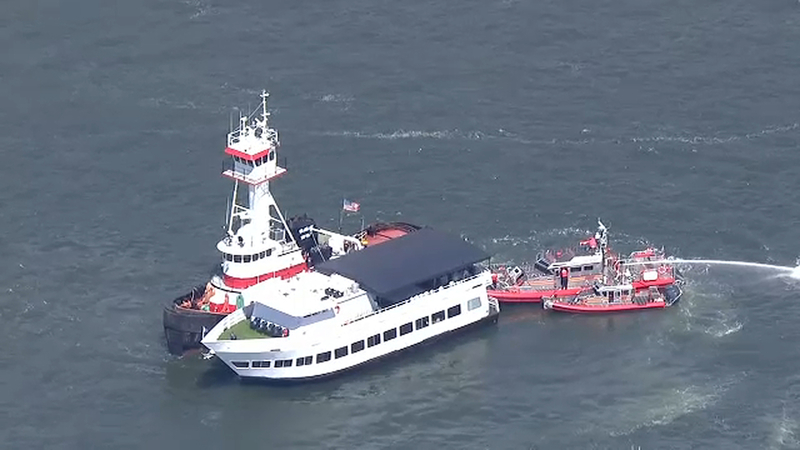 NEW YORK (WABC) -- A small fire broke out in the engine room of a party tour boat Friday morning, prompting the evacuation of dozens of passengers.

Firefighters responded to the The Jewel around 11:30 a.m. in the waters just north of Governors Island.

"All of a sudden, I saw boats and police boats and helicopters all coming up," passenger Zubair Khan said. "Not the flames, but we saw the smoke when we were off boarding. It was in the back, we were in the front."

FDNY fire boats and NYPD harbor units immediately responded and attacked the fire, even though fire officials said there was a fire suppression system on board.

NewsCopter 7 over a ferry boat fire near Governor's Island

"Initially got on with extinguishers, tried to knock it down, and then we stretched a hose line off the marine unit while the PD was evacuating the 80 passengers," FDNY Manhattan Borough Commander Roger Sakowich said. "I think you had a smokey fire that hadn't reached that level yet, and we were fortunate to get there quick enough."

The fire was quickly extinguished, and all passengers were taken off the boat and brought to Pier 11.

"It was pretty much an organized evacuation," Khan said. "So we were not even panicked."