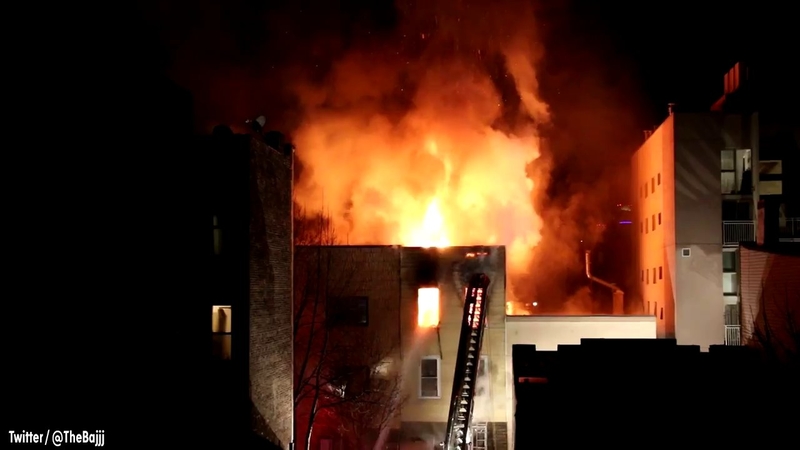 Fire burns through homes in Brooklyn

Flames broke out around 10 p.m. Sunday in a home in the 3-story building on Diamond Street in Greenpoint and quickly spread to two neighboring homes as people were quickly evacuated.

Two buildings have been declared structurally unsound while another was destroyed.

An Eyewitness News viewer nearby captured video of the flames shooting out of the window:

The FDNY reports that more than 140 firefighters responded to the scene.

Firefighters said they were not hampered by the frigid cold.

"The cold is always a challenge but but it really didn't cause any problems fighting the fire, it wasn't an impediment or uncomfortable," said FDNY Deputy Chief Dean Koester.

Three people were placed in housing by the Red Cross, but most of the families affected by the fire are staying with neighbors.
Related topics:
greenpointnew york cityfire
Copyright © 2021 WABC-TV. All Rights Reserved.
TOP STORIES
Arrest made in woman's death from fall down subway stairs
Islanders games postponed due to COVID cases
What is omicron? What to know about new COVID variant
State of Emergency issued in NY to help boost hospital capacity
Christina Applegate shares message on 50th birthday after MS diagnosis
UK, Germany, Italy report cases of new omicron variant
Half of NY's $2.4B in rent aid held up 6 months after launch
Show More
Holiday shipping deadlines to get packages mailed on time: LIST
AccuWeather: Freezing winds and potential flurries
Woman accused of punching victim over mask outside NYC bodega
Family's beloved dog found after being stolen from Long Island home
Girl paralyzed in porch swing accident now helping other injured kids
More TOP STORIES News