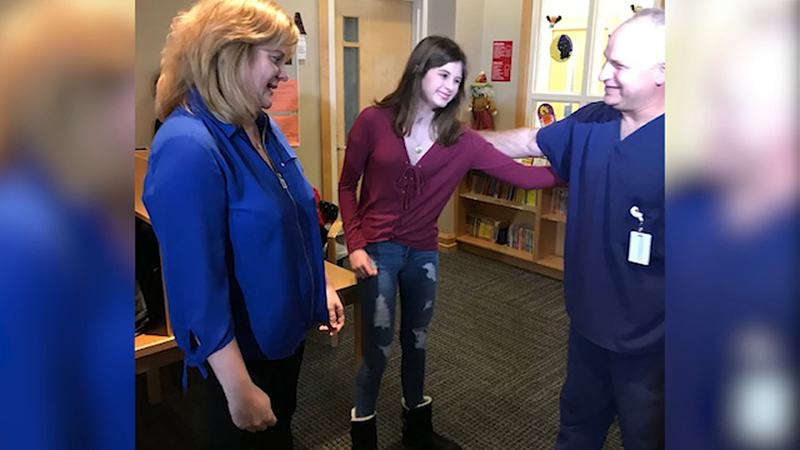 POUGHKEEPSIE, New York (WABC) -- A teenager from Dutchess County thanked the medical team that saved her life after she contracted the flu and nearly died.

Rebecca Berak of Poughkeepsie went into shock and experienced kidney and respiratory failure, just days before she was scheduled to get her flu shot.

Her family says this case should be a warning to all.

Rebecca, who was 13 at the time, started feeling ill last December. She deteriorated quickly with a fever reaching 106 degrees and bacterial pneumonia that ate away a portion of her lungs.

"Sometimes I have shortness of breath and stuff like that," she says. "I have a vest machine and a cough assist I have to do three times a day."

Her doctor says she was close to death on more than one occasion throughout her hospital stay.

"The bacteria killed the lung tissue," said Dr. Sheila Nolan of Maria Fareri Children's Hospital. "Obviously not all of her lung tissue, but she does have permanent complications due to that."

She got out of the hospital in April. On Monday, Rebecca and her mom reunited with the Maria Fareri Children's Hospital Pediatic ICU medical team that treated her.

The reunion was more than just a visit with gratitude. The teen and her mom issued a plea to all kids and their families that the flu can be deadly, so get vaccinated.

"I feel like a lot of the times people are like, it doesn't happen often, it wouldn't happen to me. But that's what I thought too and it did," said Rebecca.

"It's not a joke," said her mother Kathie Berak. "The flu can wreak havoc. In a 24-hour period I had a healthy kid to a kid I was watching die and get resuscitated. Get your flu shot."

Kathie said it was a helpless feeling to watch her child deteriorate before her eyes. Rebecca will have some life-long health effects as a result of what happened.

Flu season continues until May and Dr. Nolan says it is never too late to get your flu shot.