Family of Frank Gifford says he had CTE, brain disease found in athletes 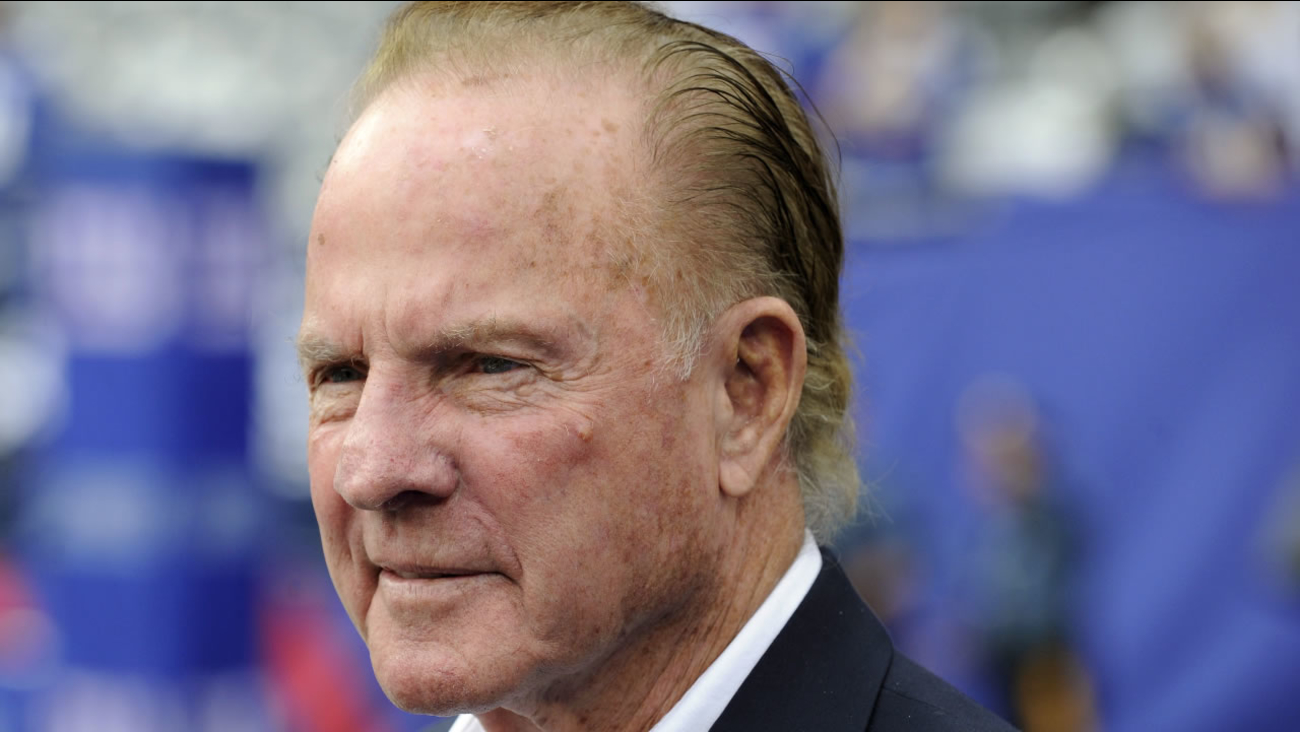 NEW YORK (WABC) -- A study of Frank Gifford's brain revealed he had Chronic Traumatic Encephalopathy (CTE,) a progressive degenerative disease of the brain found in athletes, Gifford's family announced in a statement Wednesday.

The Pro Football Hall of Famer died in August at the age of 84.

The Gifford family said it decided to have his brain studied in hopes of contributing to medical research regarding the link between football and traumatic brain injuries.

While noting that Gifford passed away of natural causes, the statement said "our suspicions that he was suffering from the debilitating effects of head trauma were confirmed when a team of pathologists recently diagnosed his condition as that of Chronic Traumatic Encephalopathy (CTE)-a progressive degenerative brain disease. "

The family's statement went on to say:

"We decided to disclose our loved one's condition to honor Frank's legacy of promoting player safety dating back to his involvement in the formation of the NFL Players Association in the 1950s. His entire adult life Frank was a champion for others, but especially for those without the means or platform to have their voices heard. He was a man who loved the National Football League until the day he passed, and one who recognized that it was-and will continue to be-the players who elevated this sport to its singular stature in American society.
During the last years of his life Frank dedicated himself to understanding the recent revelations concerning the connection between repetitive head trauma and its associated cognitive and behavioral symptoms-which he experienced firsthand. We miss him every day, now more than ever, but find comfort in knowing that by disclosing his condition we might contribute positively to the ongoing conversation that needs to be had; that he might be an inspiration for others suffering with this disease that needs to be addressed in the present; and that we might be a small part of the solution to an urgent problem concerning anyone involved with football, at any level.
The Gifford family will continue to support the National Football League and its recent on-field rule changes and procedures to make the game Frank loved so dearly-and the players he advocated so tirelessly for-as safe as possible."

Gifford starred on the Giants teams that went to five NFL championship games in the 1950's and 60's. He appeared on ABC's "Monday Night Football" beginning in 1971, first as a play-by-play announcer alongside Howard Cosell and Don Meredith, and then as an analyst.

His widow, Kathie Lee Gifford, is a host for NBC's "Today."

CTE, which can be diagnosed only after death, has been found in the brains of dozens of former players. Linked to repeated brain trauma, it is associated with symptoms such as memory loss, impaired judgment, depression, and, eventually, progressive dementia.

Bednarik was pictured standing over the unconscious Gifford, pumping his fist in celebration. Gifford was in the hospital for 10 days and sidelined until 1962.

"We have great respect and sympathy for the Gifford family," the Giants said in a statement. "We all miss Frank dearly. We support the family's decision to contribute to the discussion and research of an issue we take very seriously."

"He exemplified everything good about our game throughout his ...m years of extraordinary accomplishments, both on and off the field," Goodell said in a statement Wednesday night. "We appreciate the Gifford family's desire to help the medical community understand more about CTE, and we are grateful for their support of the league's efforts to improve safety in our game. At the NFL, we are supporting grants to NIH and Boston University as well as other independent efforts to research the effects of repetitive head trauma.

"But we are not waiting until science provides all of the answers. We are working now to improve the safety of our game. The NFL has made numerous rules changes to the game, all to enhance player health and safety at all levels of football. These include 39 rule changes and better training and practice protocols that are yielding measurable results.

"This work will continue as the health and safety of our players remains our highest priority. We have more work to do - work that honors great men like Frank Gifford."