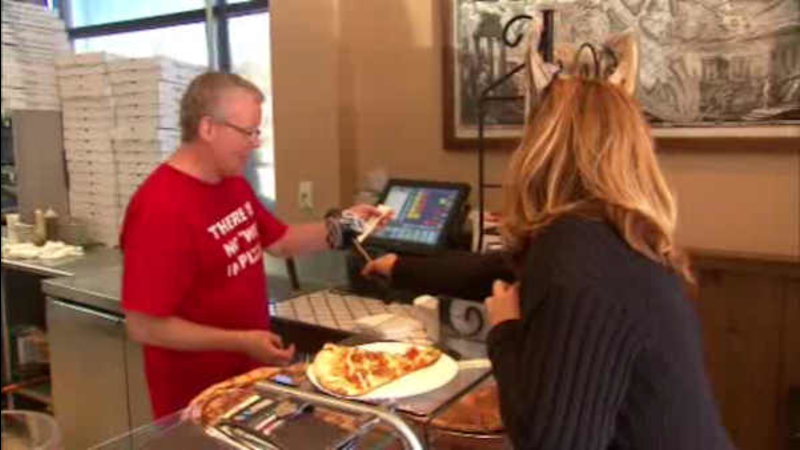 NJ restaurant helps to ease pain at the pumps

ROSELAND, New Jersey (WABC) -- A New Jersey restaurant says it will give customers a break on their food after having to pay more at the pumps as a result of the state's 23 cent a gallon gas tax hike.

Customers who present their gas receipt will have the extra amount they paid in gas tax deducted from their bill.

"I don't like it when anything gets more expensive, but gas really trickles down to everybody," said John Bendokas of Rezza Trattoria.

Gas up, keep your receipt, and then John wants to make the $2-$3 tax increase on your average gas bill a little easier to swallow.

He's in Roseland, in Essex County.

"I was kinda sitting at home being disgruntled about having to pay more gas tax and thinking about the effect it would have on my drivers, my customers and everything," said Bendokas.

John figures the average discount he'll honor will come to about $2.50.

"So I thought it would be a good way to give back to the community and kind of give them a little reprieve from it, at least at the beginning," he said.

"It is a good gimmick for the restaurant," said one customer.

"It is creative, that would be awesome because that's a pretty high gas tax now," said another.

The offer at Rezza's runs through the month of November. For the year, the average New Jersey driver will pay about $170 more in gas taxes.

"So we're gonna give you 23 cents times 8 gallons as a discount so we're talking two dollars off, so you're going to pay $1.15 for your slice," said Eddie, the man at the counter.

$2 isn't bad -- neither is the pie. They also have Brussel Sprout pizza.

"We are well known for our Sunday gravy which is offered not just Sunday but every day and our cavatelli we make in house, it's a super popular dish as well," said Bendokas.

"So you go with gravy not sauce"?, we asked.