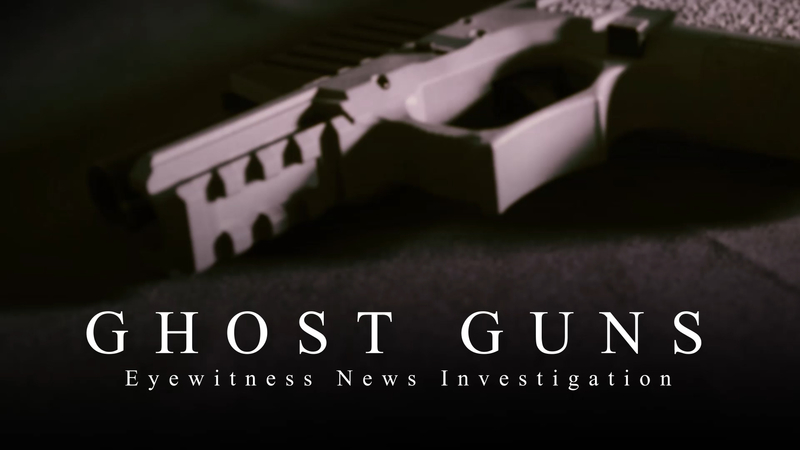 NEW YORK (WABC) -- They're called ghost guns -- powerful handguns that can be bought online without a background check or license and put together in minutes.

"I can barely screw in a lightbulb, but I'm able to put one of these firearms together," NYPD Inspector Courtney Nilan said.

They're just as deadly as a regular gun but they can't be traced.

Police are seeing an explosion of the homemade firearms across the country, which have been responsible for the deaths of two 16-year-olds in the New York City area this year.

"It's really a nightmare," said Jesus Oliveros, whose 16-year-old cousin was killed by a ghost gun in New Rochelle in January. "I never would've thought this would happen to my family."

Eyewitness News was granted exclusive access inside the ATF, the NYPD forensic crime lab and a shooting range to show you what's being done about this "emerging threat" and how ghost guns are shattering the lives of families.

Dan Krauth investigates ghost guns and why they are a problem.

The NYPD has seen an over 300 percent increase in ghost guns it has recovered so far this year compared to last year.

"Some of the kits come with everything required to build it in a matter of 20, 30 minutes with very little tools," said Daryl McCormick, ATF assistant special agent in charge.

"You have everything you need to finish the gun, minus the power tools, in a matter of minutes," McCormick said.

"You don't go to a licensed dealer, you don't have a background check done, the parts come to one location, it can be your home and in the privacy of your basement, you can assemble one of these," he said.

Last September, a man opened fire outside a New York City night club and shot four people. He dropped the gun at the scene - it was a ghost gun.

In January, high school student Julian Oliveros was killed by another teenager with a ghost gun while walking down the street in New Rochelle.

"My last interaction with him, I saw him like walking home from school and I just told him, I was like 'hey go to school' and he just looked back at me and just gave me a big smile and that's the last time I saw Julian alive," said his cousin, Jesus.

And in early April, 16-year-old Angellyh Yambo was shot and killed with a ghost gun while walking home from school in the Bronx.

"One day you're living through a nightmare, when your 16-year-old cousin is gunned down in broad daylight by another 16 year old, you're just in disbelief how could this happen," Oliveros said.

The NYPD created a taskforce to try and combat the emerging trend about two years ago.

"What we started seeing in 2021, which is continuing this year, is that these ghost guns are popping up more, not just with long-term investigations we're doing but they're popping up more with those patrol cops doing a car stop and finding a firearm," Nilan said.

Police are finding the guns during traffic stops, while executing search warrants and they're being left at crime scenes.

"Out of the portion of guns recovered in New York City, ghost guns are still a small percentage but what I tell everybody is that any gun that can fire bullets can kill someone and can hurt somebody," Nilan said.

Ghost Guns can be more deadly

Ghost guns and regular licensed firearms use the same bullets, so unless police recover the firearm it's difficult to know if a homemade gun was used in a shooting.

The instructor shot a professionally made Glock and a homemade one that was bought over the internet. They fired the same.

However, if a ghost gun isn't assembled correctly, it can be more deadly.

"It could be more dangerous, it might not function correctly, the accuracy can be off, the sights will be off, anything could happen," Greenfield said.

The NYPD gave Eyewitness News rare behind-the-scenes access to its forensic crime lab where they work on tracing illegal guns.

While licensed guns are easier to track because they have serial numbers, detectives and the ATF are getting creative amid the rise of ghost guns.

When a ghost gun is recovered from a crime scene, detectives can shoot it into a tank full of water inside its lab. This helps keep the bullet in pristine condition to compare it to other bullets left at crime scenes in the hopes of making matches.

"We keep it in the tank so we can preserve the evidentiary value," said NYPD Deputy Chief Emanuel Katranakis.

They then put it under the microscope and use a database to compare the bullets and shell casings to others left at crime scenes.

"We have instances where we perform our examination and we learn that a ghost gun has been used in not only one particular crime or shooting or assault, we see that it has been used over and over in certain instances" Katranakis said.

So far, the NYPD has identified more than 120 online retailers selling ghost guns.

"The prices are going down, that's why there's more in circulation," Nilan said. "The amount of retailers that are selling these gun parts and gun-part kits are just going up and rising."

"We're leading the way at this point, other states are now catching up," said New York State Sen. Brad Hoylman, who wrote the legislation.

But some officers and victims family members worry the new law won't be enough.

"It's good to see action being taken, New York already has one of the strictest gun-control laws in the nation, but there needs to be more of a national effort because you can easily get these ghost guns from a different state and bring them in to new York," Oliveros said.

President Joe Biden announced in early April he's issuing a federal rule this summer that will change the legal definition of a firearm to keep up with technology.

The rule will require all ghost-gun kits to come with a serial number and for licensed dealers to run background checks.

"All of a sudden it's not a ghost, it has a return address and it's going to help save lives," Biden said.

The new rule is facing opposition from Republican lawmakers.

"It all starts with online retailers," said Nilan, the NYPD inspector. "When people ask me, that's where we need to increase legislation."

She added: "Every state could make the most stringent law but if they don't make it illegal to ship to every state in the United States then you know that initial problem still exists."
Report a correction or typo
Related topics:
crimefatal shootingnypd7 on your side investigationshootingshooting range7 on your sideguns
Copyright © 2022 WABC-TV. All Rights Reserved.
7 ON YOUR SIDE
DoorDash customer gets more than Italian ice after hit and run
7 On Your Side tips to stretch your dollar and combat inflation
Queens baseball teams unable to use home field get new mound
How to customize your mortgage rate for a better deal
TOP STORIES
Hero security guard, shoppers among Buffalo shooting victims
What we know about the alleged gunman in the Buffalo mass shooting
9-year-old girl found dead in Brooklyn apartment
Suspect fired 50 rounds in Buffalo shooting that killed 10: Police
Rangers beat Penguins 4-3 in Game 7 OT
Travel Advisory issued in NYC for Monday due to severe storms
NYPD officer recovering after bitten in head by pit bull
Show More
1 killed, 5 hurt in California church shooting, authorities say
AccuWeather Alert: Gusty storms
Semi-automatic used in mass shooting purchased legally in upstate NY
Livestream of Buffalo mass shooting removed in under 2 minutes: Twitch
NYPD stepping up patrols outside Black houses of worship
More TOP STORIES News