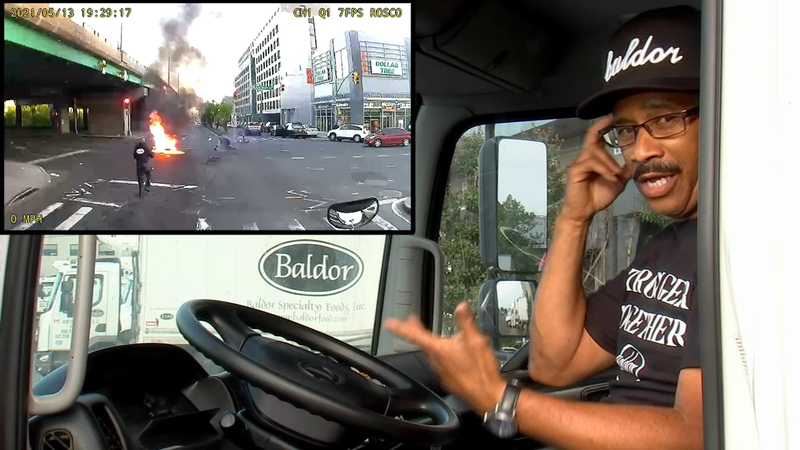 HUNTS POINT, The Bronx (WABC) -- A good Samaritan quickly jumped into action to save two teens in a dirt bike accident in the Bronx.

On May 13 around 7:30 p.m. the bike collided with an SUV at the intersection of Bruckner Blvd. and Hunts Point Avenue.

The 16-year-old driver of the bike and the 13-year-old passenger were both ejected, and the dirt bike burst into flames

Julio Hernandez, a Baldor truck driver, jumped out of the truck with a fire extinguisher to help the teens.

His truck's camera recorded the moment when the dirt bike collided with the SUV.

Good Samaritans quickly jumped into action to save two teens in a dirt bike accident in the Bronx.

The 16-year-old driver of the dirt bike suffered burns to his arms as well as leg injuries. He was taken to the hospital in serious, but stable condition.

The 13-year-old passenger suffered head trauma and was taken to the hospital where she is in serious but stable condition.

The driver of the SUV was not injured and stayed on the scene.

No arrests were made, although dirt bikes are illegal on regular roadways.

Michael Muzyk is President of Baldor Specialty Foods, which feeds New York and beyond from a massive warehouse in the Hunts Point market.

Baldor has equipped all 350 of its trucks with a windshield camera system, and they say the video of Hernandez putting out that fire is just an extreme example of what all of their drivers face every day

Lately, the scourge of dirt bikes and ATVs has been a constant presence across the city.

Police last week, announced cash rewards to anyone who reports an illegal bike. But they keep popping up someplace else.

"It's pockets. You'll see it in Manhattan for a while then around the Bronx for a while than on the Bronx River Parkway, then on Orchard Beach," Muzyk. "So they're a little ahead of wherever they're being caught."

It is unclear if the teens were wearing helmets. Luckily, they had Hernandez on their side.

"I was doing what I was supposed to do. Save the people," Hernandez.