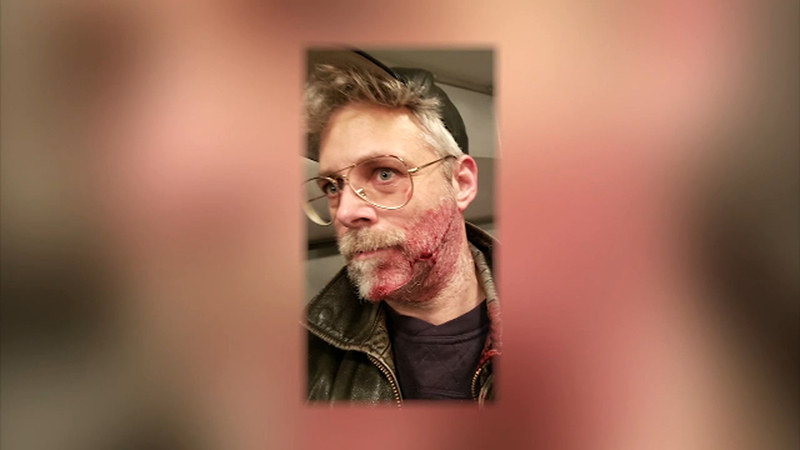 WILLIAMSBURG, Brooklyn (WABC) -- A man who tried to break up a fight on the subway in Brooklyn ended up getting slashed in the face.

And now the Good Samaritan is speaking out about the frightening attack on the L train in Williamsburg.

"Mostly I'm just reading books about the many different Captain Marvels," he said.

Lequidre, 51, has a new distinguishing feature: a 15 stitch memory of his most honorable moment.

It started on a crowded L train at Union Square late Friday night. It was crowded and Zorikh was reading a comic book.

He says one man on the train was pushing another, much smaller man out of the car. They had all just boarded.

"There's this guy pushing the shorter guy out of the train, like really angry and aggressive like," Zorikh said. "He's doing it again and again. The guy doesn't seem to know what's going on."

But the man did it again. "Wham, and I'm like hey dude, what's going on here?", said Lequidre. "What's your problem, just let him on the train. Then he proceeded to spit in my face."

Then there was some yelling and it all seemed to be over, but it wasn't. Several stops later, now in Brooklyn, the man who had spit was a couple of feet away.

"Swipe, and I thought he was trying to punch me," said Lequidre. "And I didn't have time to block or do anything. The people were like, dude, you're bleeding. And at that point the guy turned and left."

The people on the train stayed with him until police and an ambulance got there. No one has been arrested.

Would he do it again, stand up for the little guys he reads about? "I would call out the guy who was being rude," he said. "I would also get off the train at the next stop."