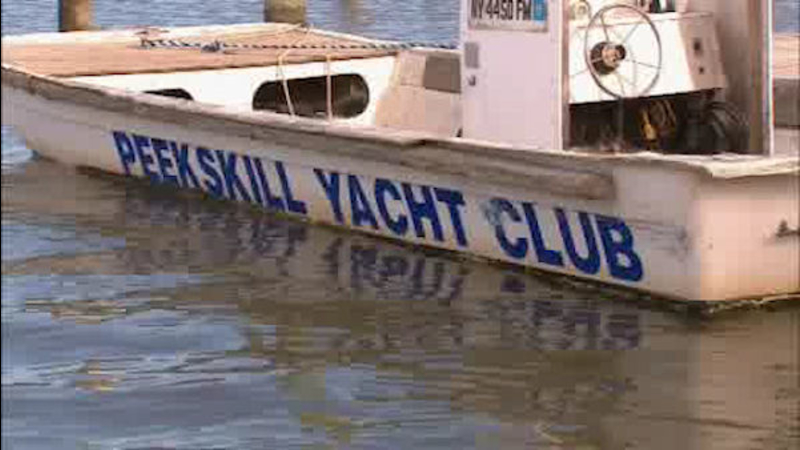 PEEKSKILLL (WABC) -- A pair of Good Samaritans are being hailed as heroes after they sprung into action followed a jet ski accident in Peekskill over the weekend.

Brian Calabro and John Ricci hopped in a boat and pulled a trio of men from the water.

"You got no business being on the water when the water is 50 degrees," Ricci said.

And that's the lesson hopefully learned at the Peekskill Yacht Club after the three victims on one jet ski ended up in the Hudson River around 5 p.m. Sunday. They immediately called for help.

"We looked, and we see this jet ski sinking with a person on it," Ricci said. "So we ran over to the club and grabbed our work boat and shot out there. And we thought there was two, and then there (were) three people."

Ricci and his friend Brian Calabro, who just happened to be in the nearby shipyard, quickly noticed the men were not prepared for a night on the water.

"They were in jeans and sweatshirts with life jackets," Calabro said. "You know, after a while, that's not the best attire to have being in the water."

Drowning wasn't so much the concern because of the life jackets, but the water temperature was a bone-chilling 51 degrees.

"The one older gentleman there, he was really cold," Ricci said. "That's why I gave him my sweatshirt and tried to warm him up a little bit as we were heading back."

The two Good Samaritans and fellow boaters don't consider themselves heroes, but they are glad they were in a position to lend a helping hand.

"It's just something that I hope someone would do for me if I was in that situation," Calabro said. "God forbid something happens to you out there, you want someone to hopefully be there for you."
Related topics:
peekskillrescuejet skier
Copyright © 2022 WABC-TV. All Rights Reserved.
TOP STORIES
Winter Storm Update: Tracking the nor'easter
Widow delivers heart-wrenching eulogy for NYPD Detective Jason Rivera
Final farewell for NYPD Detective Jason Rivera
'I can't believe I'm alive': Man shoved onto subway tracks speaks out
NY area urged to prepare for snow, wind as nor'easter approaches
Winter nor'easter: LIRR suspended Saturday, other mass transit info
'This is a big one': Murphy declares state of emergency in NJ
Show More
3 arrested in shooting death of innocent honor student in New Jersey
NY college student found unconscious on freezing morning dies
Taylor Swift fan arrested after crashing into NYC townhouse
Parts of Connecticut could get 2 feet of snow, Gov. Lamont warns
Hochul extends NY mask mandate as Appellate Court hears case
More TOP STORIES News