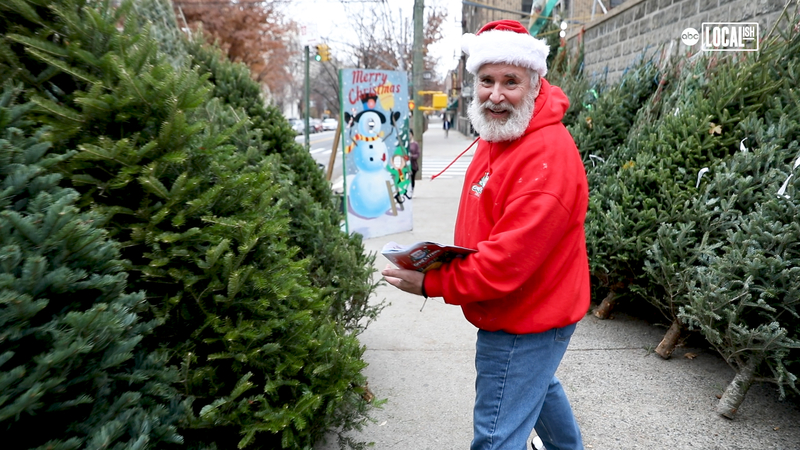 ASTORIA, Queens -- This New York City school teacher has been selling Christmas trees for over 34 years!

Greg Walsh was born in Woodside, Queens in 1962. As a child growing up in Queens, he had a paper route, and by the time he was 16, he was running a fruit stand in Manhattan. He studied Business at SUNY New Paltz and Education at CUNY Queens College, after which he became (and remains to this day) a school teacher in a public high school for special-needs students.

Greg's Trees was established in College Point 34 years ago.

"We were peddling and selling fruit and the season ended. We were like 'What are we going to do?' So we came up with the idea to sell Christmas Trees," said Walsh.

Greg remembers the first year as being "a total flop" and he lost money. The second year, they learned from their mistakes and figured out how to do it right. Opening their first stand in Queens at Coppola's Shopping Center.

He only buys from growers outside of the city. He sources trees from five farms across North America (none are in New York). Some of the trees are 30-35 feet in size and take 10-15 men just to unload so he said that's truly a sight to behold.

All year, Greg works closely with growers in Quebec and the Blue Ridge Mountains, ensuring that the tree farms are green and sustainable, and that every tree sold at Greg's is fresh, hearty, and gorgeous.

Greg's Trees has now expanded to many spacious locations in Astoria at Bohemian Beer Garden, in Manhattan at Essex Street Market or ABC Playground, and in Brooklyn at Greenwood Park, McCarren Park, and The Springs.

Every year, Greg's creative team transforms each one of these parks and beer gardens into vibrant winter wonderlands. Besides the myriad lights and decorations, there are hand-painted character cutouts to poke one's head through, a wreath-making station, and a giant sleigh where Santa Claus holds court on weekends.

Greg employs "Elves" from all over the country and brings them to the city to live in trailers for the month to sell and prepare the trees. He calls it "urban camping" and allows people to live in New York City for the holidays while making a good living.

"Every stand has a trailer that the guys can live in," said Walsh.