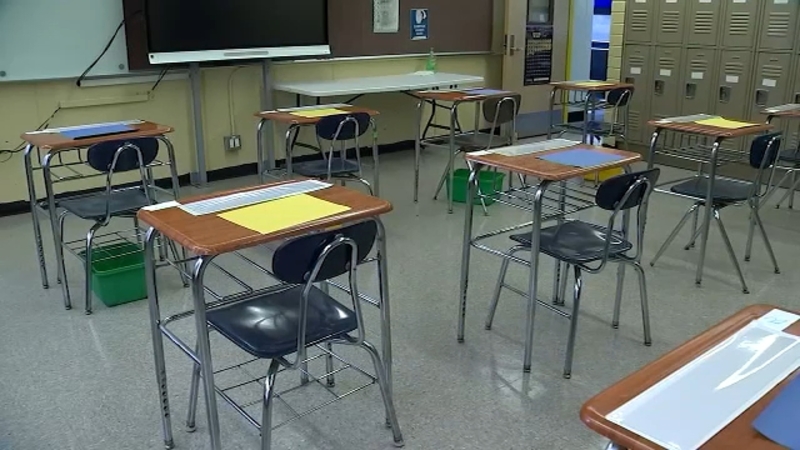 "Beginning Thursday, November 19, all school buildings will be closed, and all learning will proceed remotely for all students, until further notice," Schools Chancellor Richard Carranza said in a letter to parents. "You will hear from your principal shortly about next steps for you and your student. Please note that this is a temporary closure, and school buildings will reopen as soon as it is safe to do so."

Mayor de Blasio also confirmed the temporarily closing of public schools via Twitter -- private schools will not be impacted.

New York City has reached the 3% testing positivity 7-day average threshold. Unfortunately, this means public school buildings will be closed as of tomorrow, Thursday Nov. 19, out an abundance of caution.

We must fight back the second wave of COVID-19.

During his daily briefing Wednesday, the mayor said the positivity rate is "exactly on the nose" of three percent on the seven-day rolling average.
EMBED More News Videos

De Blasio expressed his disappointment on the decision while feeling strongly about bringing schools back.

The mayor said "the week after Thanksgiving is the earliest" schools could reopen, but they "can't say for sure" because they still have to figure out the standards for reopening.

He said the plan to bring students back will be announced in the coming days.

By state measure, the city's seven-day rolling average is 2.5%.

However, there have been some reports that this letter was followed up by a call that stated it was still being discussed.

"The city established the three percent infection rate threshold to make sure that schools did not become centers to spread the coronavirus," Mulgrew said. "Since the three percent rate has been reached, education will continue but all students will be learning remotely. Now it's the job of all New Yorkers to maintain social distance, wear masks and take all other steps to substantially lower the infection rate so school buildings can re-open for in-person instruction."

Mulgrew reiterated the UFT wants schools to be open again . He says he needs the public's help to "put this virus at bay" by lowering the citywide positivity rate.

"As Nassau County Executive, I want to make clear to residents that I will do everything I can to keep our schools open," she said. "Thanks to the hard work of school administrators, school buildings have not been a major vector of transmission in Nassau. Our contact tracers have found that the virus is primarily spreading at social gatherings where little to no precautions are taken. Closing schools should be the absolute last resort. Isolating children from teachers and classmates is detrimental to young people's mental health and educational and emotional growth. Closing schools causes further economic devastation, and disproportionately harms families in lower-income communities. If we all do our part, we have the tools and know-how to get through this winter without a complete shutdown. Let's continue to wear our masks, practice social distancing, and avoid unsafe gatherings to save lives, keep kids in school, and ensure businesses can stay open."

"This is a devastating moment for New York City. Through the Council's oversight, we know that remote learning is failing many of our most vulnerable students, including special education students, those who live in homeless shelters, and those from low-income neighborhoods. We also know that many students do not have the devices they need for remote learning, while others are waiting on Wi-Fi. This was unacceptable in the hybrid learning model and catastrophic now that we are going fully remote. The City needs a detailed plan to keep all students' learning on track. This should have been done already, but since it hasn't, they must move quickly to put a plan in place. The de Blasio Administration also needs to present the public with a reopening plan. This has been a disaster for parents and caregivers. The least the Administration can do is to be honest about what to expect going forward."

Parents are already gathering and plan on hand delivering a petition Thursday to both the mayor and governor that calls on the mayor to keep schools open.

Meanwhile, private schools will remain open, including schools run by Brooklyn Diocese and the Archdiocese of New York.

Cuomo said schools can "test out" of orange zone, or reopen, if they remain closed for at least four days, clean and test people as they come back in.

If the city hits three percent and want to reopen schools in an orange zone, Gov. Cuomo said there needs to be a different formula for schools to test out. He added they cannot test every student in New York City.

On Monday, de Blasio said the city had "a fight ahead" to keep schools open.