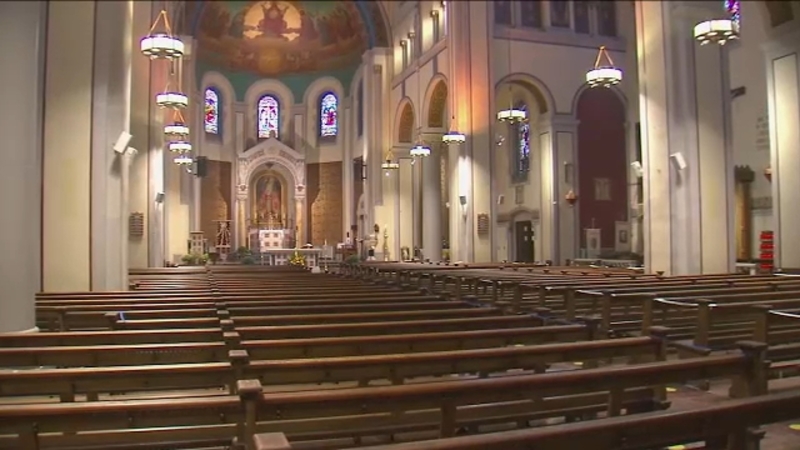 NEW YORK CITY (WABC) -- The Governor's Office Saturday said the Brooklyn Diocese's request for a temporary restraining order over the new NY COVID restrictions was denied by a judge.

On Thursday, the Catholic Diocese of Brooklyn filed a lawsuit in federal court against the State of New York, on the basis of the violation of their fundamental First Amendment right, the free exercise of religion.

In the court order, the judge wrote it was a "difficult decision" because the order was written to "target a different set of religious institutions" and the Brooklyn Diocese "appears to have been swept up in that effort despite being mostly spared, so far at least, the problems at hand."

The Brooklyn Diocese responded to the decision with a statement from Bishop Nicholas DiMarzio.

"We are disappointed by last night's initial ruling, but this is only the beginning of the case, and we expect ultimately to prevail," DiMarzio said. "We are seeking what is just. And we have kept parishioners safe and will continue to do so. Thus, there is no reason for this latest interference with our First Amendment right to celebrate Mass together, so we will continue to press the courts and our elected officials to end it as soon as possible. We are left with no choice but, for now, to abide by the new restrictions that limit Mass attendance to 10 people in the red zones and 25 in the orange zones. But we will continue to fight to vindicate our fundamental constitutional rights, and we will continue to be a model for safety in our religious community. And by doing right and being right, we will prevail."

As the leader of the Diocese of Brooklyn, DiMarzio says it is his "sacred duty to spiritually provide for all parishioners, mothers, fathers, and our children who attend church."

"We filed this lawsuit in the name of the 1.5 million Catholics who worship in our Diocese, who celebrate Mass in 33 languages, and come from a diverse tapestry of ethnicities, races, and nationalities so that we could all keep our right to pray in church as one community of believers," he said. "Last night's initial decision is a sad day for our Church community, but we will not let it deter us from our faith. I ask all Catholics to join me in continued prayer for the end of this terrible virus."

A federal judge also ruled against a group of Orthodox rabbis Friday, who filed a lawsuit against New York's new COVID restrictions.

As the state works to lower several coronavirus clusters across New York, many of them are spiking in areas largely dominated by Orthodox Jewish groups who are now battling against the new restrictions.
EMBED More News Videos

Marcus Solis has more on the COVID restrictions in certain parts of New York City.

New York Governor Andrew Cuomo says his reasoning is simple and is just trying to prevent the spread of the hot spots to other communities.

Orthodox Jews, however, feel they are being unfairly targeted and the reason is also political to suppress their vote for President Donald Trump.

The lockdowns went into effect Friday, with enforcement happening in 20 ZIP codes in Brooklyn, Queens, Rockland County and Orange County. These areas make up 2.8% of the population but the positivity rate in some of the communities has been above 10% for the last two weeks.

The coronavirus pandemic hit another fever pitch in Borough Park, Brooklyn overnight. As state and local officials work to crack down on COVID clusters, they are getting some push

Schools and nonessential businesses must close, while restaurants are back to takeout-only. There's also a limit of 10 people at religious gatherings.

On Saturday, Governor Andrew Cuomo announced a 4.95% positivity rate in the "red zone" areas. The areas are home to 2.8% of the state's population, yet have had 18% of all positive cases reported this week to New York State.

"Our numbers remain good news, even as clusters appear in certain areas of the state," Cuomo said. "Our testing system is so advanced that we were able to track clusters to 2.8 percent of the state's population and attack the virus within that population. It's going to take the work of all of us now to make sure we don't go backwards on our hard-fought progress. We must all continue to wear our masks, wash our hands, remain socially distant, and above all, stay New York Tough."