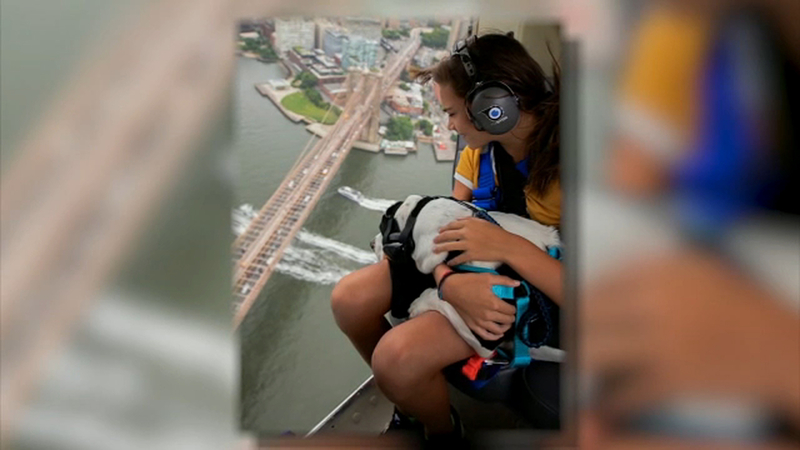 EAST SIDE, Manhattan (WABC) -- A helicopter tour company says it will no longer be flying dogs or animals in any of their open-door flights.

Sen. Charles Schumer of New York and Sen. Bob Menendez had blasted the company, FlyNYON, for operating the doors-off flights for tourists and their dogs.

The lawmakers called on the FAA to close the loophole that allows such flights for aerial photography, saying it is meant for professional and commercial purposes, not tourists.

FlyNYON was allowing passengers to bring their dogs along for a doors-off sightseeng ride at a discounted price during fundraising efforts. The money being raised was going to a nonprofit to help rescue animals in the Bahamas.

But the company announced the change in its policy Monday regarding the flights for pets.

FlyNYON CEO Pat Day released the following statement:
"At no point has FlyNYON ever, or would ever, endanger the safety of animals and put them in a position for potential abuse. In fact, the program now being attacked and deliberately misconstrued, has raised over $25,000 to help save the lives of dogs, cats and other animals. That was our sole intent and it's unfortunate that some people have ruined a safe and successful fundraiser. However, while we strongly disagree with the characterization and allegations directed our way, we have decided effective immediately, we will no longer be flying dogs or animals in any of our open-door flights. FlyNYON takes great pride in the safety of our operation and promise to continue providing the safest helicopter experience for our customers."

Responding to the company's action, Sen. Schumer released a statement:
"These dangerous doors-off flights are meant for professional photographers - not social media enthusiasts and their innocent dogs. Now that FlyNYON says they'll do right by the animals, they should consider the same for people and axe the dangerous doors-off flights altogether before more lives are lost."

Five people drowned in March of 2018 when they were unable to free themselves from their harnesses after their open-side helicopter rolled over into the water in the East River. The pilot, who was not wearing a harness, survived.

The helicopter was operated by Liberty Helicopter on behalf of FlyNYON.