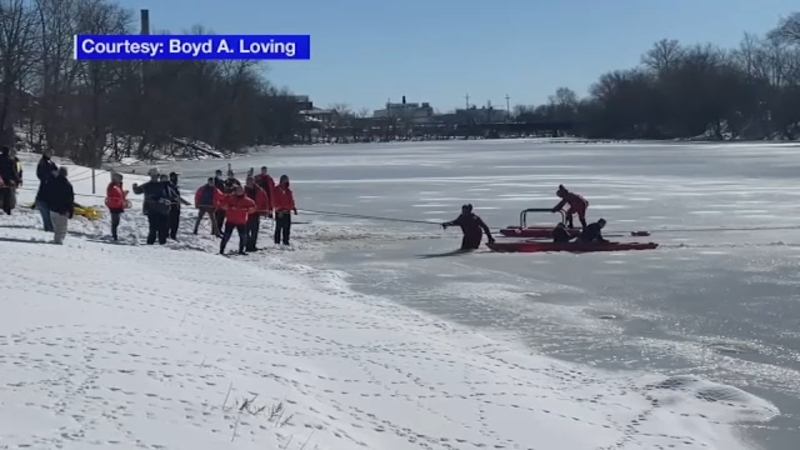 ELMWOOD PARK, New Jersey (WABC) -- A mom and her young daughter were rescued after falling through the ice in New Jersey on Thursday afternoon.

The incident was reported in the Passaic River near the Elmwood Park Marina around 1:30 p.m.

A person who witnessed the incident responded with a kayak.

Elmwood Park Police Department Chief Michael Foligno jumped into the kayak and used a shovel to propel himself forward on the ice.

"The mother was screaming, she said she couldn't hold the child anymore, I couldn't sit still and do nothing, a gentleman from the gas station had a red kayak there, I grabbed it, I jumped in it and basically clawed my way to the center in the kayak and was able to get to them," Foligno said.

Foligno says when he reached them, they were seconds from going under.

That is when he tried to remove the child from the water without flipping the kayak. Police say the child was holding onto the woman and wouldn't let go.

Rescuers in New Jersey braved frigid, ice-filled water to save a mom and her 2-year-old daughter who fell into the Passaic River.

Police said by that point, the child was going in and out of consciousness.

The 37-year-old woman was aggressively grabbing at the chief to get in the boat and screamed, "we're going to die!"

Foligno tried to keep her calm so she didn't tip the boat and was able to get her inside the kayak.

Meanwhile, two Elmwood Park firefighters in wetsuits were able to get to the kayak and tie a rope to the boat.

Other responders on the shore were able to pull the kayak back to safety.

Both the woman and her daughter were taken to the hospital for treatment.

The mother and daughter may have been in the water for up to 45 minutes. Police said they think the mother and her daughter were crossing the river to get to the other side.

A rare Snowy Owl was spotted again in Central Park, one week after it was spotted for the first time in over 100 years.