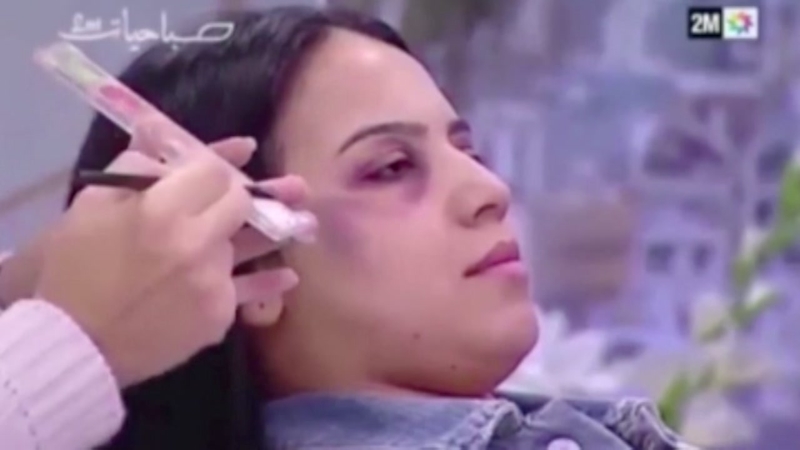 The state-owned 2M TV caused controversy with its segment on Wednesday showing a makeup artist covering blue "bruises" on the eyes and cheeks of a model.

"It's a painful and sorrowful topic, but on the occasion of the International Day for the Elimination of Violence Against Women, we will show you the makeup to cover the signs of beatings," said the smiling artist. "It is a topic we lack the courage to discuss."

The segment, which apparently also used makeup to create the "bruise," angered activists, who said it normalized domestic violence.

"After the beating, this part is still sensitive, so don't press," the host said in Arabic as she applied makeup on the woman's face, eventually concealing the woman's bruises.

"Make sure to use loose powder to fix the makeup so if you have to work throughout the day, the bruises don't show," she said.

Activists also created a petition on the change.org website calling for punitive measures against the morning show.

"Do not cover domestic violence with makeup, condemn the aggressor," said the petition, posted by a group calling themselves Concerned Moroccan Citizens.

The channel apologized two days later, saying the segment was inappropriate, an editorial error of judgment and in violation of its policy of 27 years that advocated for women's rights. It also removed the video clip from its website.

The apology did little to placate the outrage. Social media users continue to condemn the channel and the petition had attracted more than 2,000 signatures by Monday.

Domestic violence is not a crime in Morocco and, according to a government survey conducted in 2009-2010, two-thirds of women had experienced physical, psychological, sexual or economic violence.

A draft bill criminalizing domestic violence was passed by the First Chamber of Parliament, the House of Representatives, in Morocco in July.

However, due to a general election last month, it has yet to be reviewed by the second chamber, the House of Councillors.

According to Rothna Begum, Middle East and North Africa women's rights researcher at Human Rights Watch, the draft bill does not do enough to ensure victims will get the help they need from authorities.