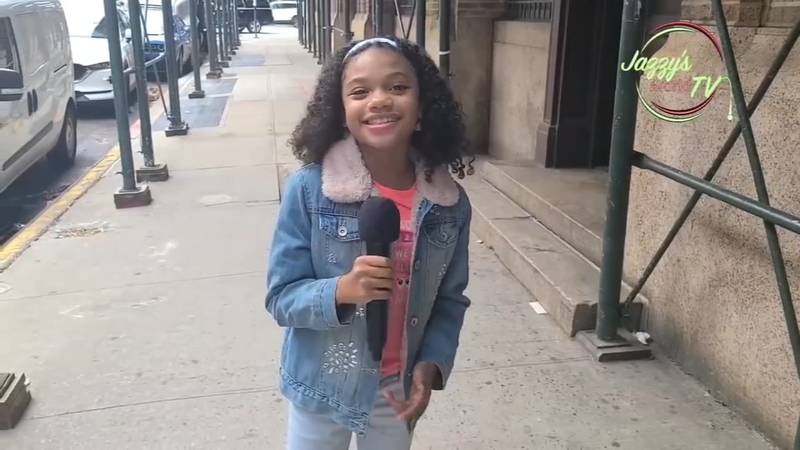 BUSHWICK, Brooklyn (WABC) -- What do Rep. Alexandria Ocasio-Cortez, Carmelo Anthony, and Jay-Z have in common? All have been interviewed on a YouTube channel called Jazzys WorldTV by a sixth grader from Bushwick.

Jazlyn "Jazzy" Guerra is just 11 years old, the pride of her Brooklyn neighborhood and beloved by her close knit Panamanian-American family.

She's also a broadcast journalist with more than 80,000 followers on Instagram.

When Jazzy met Jay-Z, she was determined to figure out what made him so successful.

"Got to have ultimate confidence like you do," he replied. "You're very confident."

What looks like a romantic comedy starring Daisy Edgar-Jones and Sebastian Stan turns out to be an intense drama called "Fresh" with an unusual twist. Sandy Kenyon has more.

"I'm usually nervous, like a lot, before my interviews," she said. "But I turn that nervousness into excitement."

"I'm always talkative, and I like to learn more information about people," she said. "Also, I like to, you know, kind of get the inside story."

That's how Tom Holland, a.k.a. Spider-Man, came to talk about his dyslexia.

Celebrities, she says, are frank with her.

"They're used to adults asking them boring questions," she said.

The young journalist lives with her parents and four siblings. Her dad, Luis De Hoyos, quickly realized she had a talent for interviewing.

"The first time she did it," he said. "The most important values I feel like she's learning from this is hard work, dedication, and understanding that you, in order to be successful in anything that you do, you have to put in the time and the practice."

Jazzy was 9 when she started and sometimes had to wait hour to get a few minutes with stars as they entered or left a building.

The success of her YouTube channel makes it easier to get the stars in front of her mic, and she thinks being young and eager gets her better interviews.

"I think that is a key to my interviews, actually," she said. "Another key is being prepared, and as long as I work hard and know what I want to do, and as long as I know this is something that makes me happy, I'm OK with it."

The next goal for this charismatic kid is already on the horizon: Jazzy wants to have her own talk show. But for now, the sixth grader is happy because the older students want to eat lunch with her -- which she thinks is "super cool."