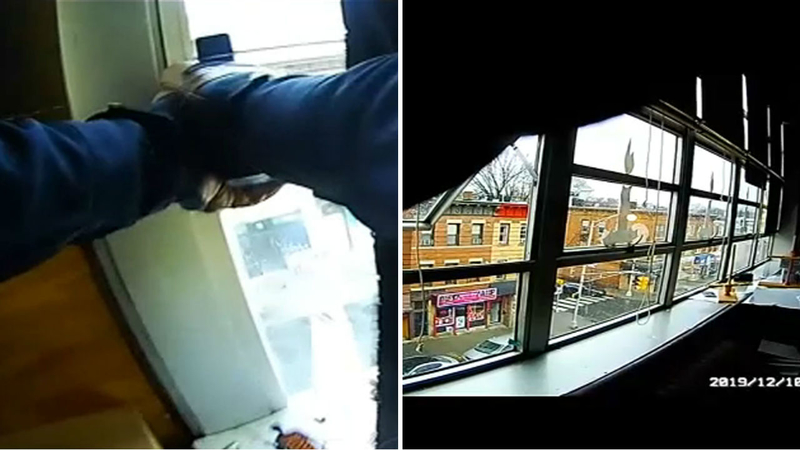 Some of the video may be disturbing to viewers.
EMBED More News Videos

Authorities identified the attackers as David Anderson and Francine Graham and said they were fueled by a hatred of Jewish people and law enforcement. Authorities had said Anderson exited the white rental van they drove to the scene carrying an AR-15 style weapon, while Graham carried a 12-gauge shotgun into the shop.

The video shows police arrived at the market less than two minutes after the shooters exited the van.

One video capturing part of the shootout shows a Jersey City police officer firing his pistol toward the market from the window of a Catholic school across the street. The officer is seen reloading his weapon as numerous volleys of gunfire are heard.

"I think he's down. No he's still moving," the unidentified officer is heard saying.

RELATED: Jersey City shooting was planned for months, based on hate, investigators say

The officer moves past rows of small desks from one classroom, past lockers and into another before he shoots out of the window, which had been decorated with a paper cutout of an angel. Schools in Jersey City had been locked down that day.

Another video shows a police vehicle smashing into the store front nearly three hours after Anderson and Graham arrived.

Anderson, 47, and Graham, 50, shot and killed Jersey City Detective Joseph Seals in a chance meeting in a cemetery, then drove to the market and killed Mindel Ferencz, 31, who owned the store with her husband; Moshe Deutsch, 24, a rabbinical student from Brooklyn who was shopping there; and store employee Douglas Miguel Rodriguez, authorities said.

Rodriguez held the back door open for a wounded customer to escape before he was shot, authorities said earlier.

Officials say there was evidence that the suspects had been planning the attack for months and that they checked out the JC Kosher Market on Martin Luther King Drive on at least two occasions and entered the store during one of them, even driving by the business twice on the day of the shootings.

They also searched other Jewish locations, however, so it is unclear why they settled upon that as their target.