The plane was diverted to Minneapolis where the man was arrested.
WABC 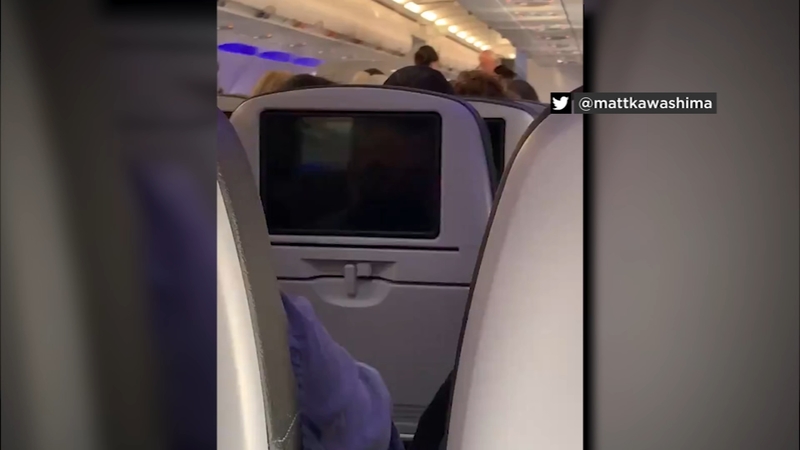 NEW YORK (WABC) -- A tense situation unfolded on a flight from Kennedy Airport to San Francisco after an unruly passenger refused to wear a mask, began snorting a white substance, and then was accused of touching at least one female passenger.

The plane was diverted to Minneapolis, where the man was arrested.

"So we as a team made the decision to come here," a JetBlue employee announced to passengers, who then erupted in cheers Sunday night.

The plane had departed JFK in route to San Francisco International Airport but was diverted to Minneapolis-St. Paul International after the passenger allegedly acted in a threatening manner.

In a video taken by a passenger, those with JetBlue explained what the man had done.

"Gesturing stabbing motions towards another passenger and was also observed erratic behavior and snorting a white substance," an employee says on the video.

Witnesses said the passenger had a bag full of that white substance, touched at least one other woman, made inappropriate comments to numerous female passengers, yelled racist slurs towards passengers upon boarding, and refused to wear a mask.

"When he got to his seat, he started yelling that he wanted a white Porsche," passenger Bob McKanzie said. "I don't know who he was talking to, but that's what he was saying."

JetBlue explained that they had to move one female passenger away from the man.

"He kept walking back and forth to the bathroom," passenger Delaney Washington said. "He had no shoes on, and he smelled awful...He kept saying, 'Bless you" to me, and he was acting really erratically."

Upon landing in Minneapolis, witnesses said the man was met by officers and the FBI.

"I think everyone was very uncomfortable, and he posed a flight risk and, again, kudos to the captain for keeping everyone safe and taking appropriate action," said a witness who sat within feet of the passenger.

That witness said the man in question had a plastic knife and may have been on cocaine or meth.

Others were unclear on what was going on even as it was happening, saying the man had a white feather with him through everything.

Several passengers said they were appreciative in the airline's response in getting the man off the plane. Passengers arrived a couple of hours late, but they said they were happy that the crew got the situation under control.

"He just wanted us to sing at some point, and he smelled very strongly," witness Salma Srour said. "It was a very pungent smell, and he kept walking to the bathroom. He wasn't wearing a mask."a