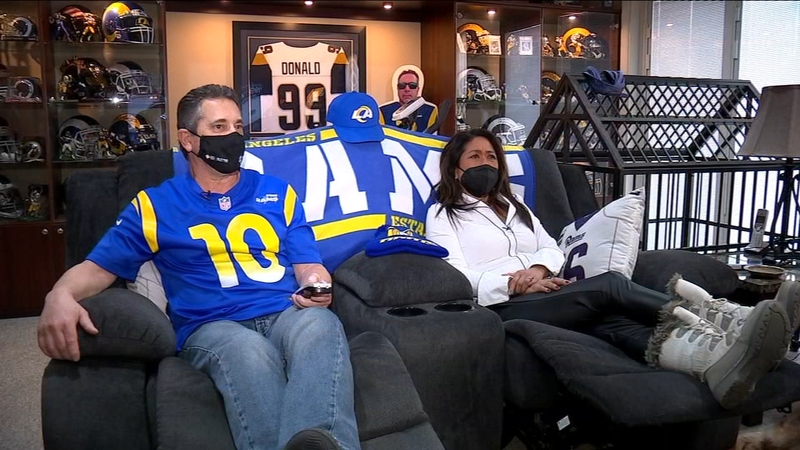 MOUNT ARLINGTON, New Jersey (WABC) -- Super Bowl LVI is just a little over a week away, with the Cincinnati Bengals taking on the Los Angeles Rams.

We may live in Giants and Jets territory, but one Eyewitness News viewer who just happens to be a member of Rams Nation needed help fighting none other than the National Football League.

Luckily for Joe Destito, Nina Pineda and 7 On Your Side are always game.

Destito's basement in his Mount Arlington home is floor to ceiling Rams-abilia, with more than a dozen footballs and an all-star wardrobe of 45 game-used jerseys.

A Rams fan since age 7, he's been collecting for nearly 40 years.

"These are all signed by Rams," he said. "Everything here is signed and authenticated."

7 On Your Side's Nina Pineda gets the heat back on for an elderly woman in Brooklyn who has been without heat and hot water all winter.

Last Sunday, his Ram-cave was rocking when LA punched its ticket to the Super Bowl.

But months earlier, neither was Destito. For the past year, he's been waiting to receive a Rams John Johnson game-used jersey.

"He's one of their mainstays for their defense," he said.

Last February, Destito won an NFL-run auction with a $510 bid. But a year later, he's yet to receive his jersey.

Months later, the NFL emailed saying there was an "error in the listing."

"And the item is no longer available," Destito said.

They promised to process a refund to his credit card, but Destito lost the card and had to cancel it.

Then, the NFL promised to send a check. But that was last fall.

Energy costs are on track to light up your family's budget this year -- check out these tips from 7 On Your Side's Nina Pineda to keep bills low.

"They just wouldn't return the money," he said. "I had my lawyer contact them."

So Destito handed off to us, and we connected with the NFL.

"And within an hour and a half, I recieved an email saying they'll ship the check overnight," Destito said.

The NFL admitted it fumbled, mistakenly auctioning off the same jersey twice. They apologized and overnighted the check, $535 signed by NFL Commissioner Roger Goodell himself.

"Thank you for all the work that you've done," Destito said.

Fill out the form below or email your questions, issues, or story ideas by filling out the form below or by emailing 7OnYourSideNina@abc.com. All emails MUST INCLUDE YOUR NAME AND CELLPHONE NUMBER. Without a phone number, 7 On Your Side will not be able to respond.
Report a correction or typo
Related topics:
sportsmorris countylos angeles ramsnflsuper bowlfootball7 on your sideroger goodell
Copyright © 2022 WABC-TV. All Rights Reserved.
7 ON YOUR SIDE
Baby formula scams are skyrocketing: How to avoid getting duped
United cancels couple's flight, charges $4K more for same seats
529 Plans - How they can help you save/pay for college
7 On Your Side helps grieving mom fight for daughter's death benefits
TOP STORIES
3 people killed in crash near catering hall on Long Island
NJ police impose curfew after large party gets out of hand
Empire State Building lit to honor Notorious B.I.G.'s 50th birthday
AccuWeather Alert: Still steamy
2 people pulled from Hudson River after jet ski collision
Man dies after collapsing at finish line of Brooklyn Half Marathon
Teen sought in 11-year-old shooting death also wanted for 2 robberies
Show More
White Sox shortstop accuses Yankees' Donaldson of making racist remark
Heat Advisory issued ahead of possible record-breaking temperatures
Some peanut butter recalled for potential salmonella
Why a NJ teacher keeps an empty chair in his classroom
Puppy stolen from NJ pet store returned unharmed
More TOP STORIES News