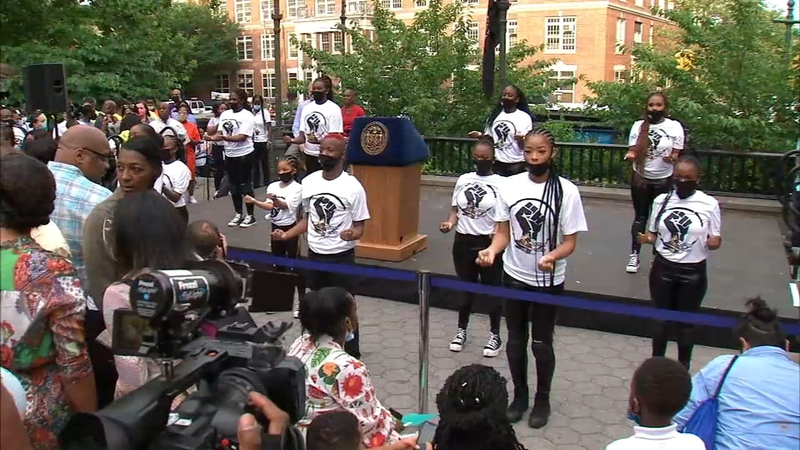 President Joe Biden signed legislation Thursday making Juneteenth a federal holiday that will be observed Friday, since the actual date falls on a Saturday.

This is now the first new federal holiday since 1983, when Dr. Martin Luther King, Jr. day was created.

"The emancipation of enslaved Black Americans didn't mark the end of America's work to deliver on the promise of equality. It only marked the beginning. To honor the true meaning of Juneteenth, we have to continue toward that promise because we've not gotten there yet," President Biden said.

The timing of Juneteenth seemed to have been the complicating factor for the city, and since Juneteenth falls on a Saturday, it is treated as a floating holiday for workers to use whenever they please.

Still, the city is taking other steps to honor Juneteenth. The "official city celebration" started at 6 p.m. on the James Baldwin Lawn.

Residents from near and as far as Virginia claimed their spot in the park for the city's official Juneteenth celebration. There were performances, food trucks and a planned speeches by de Blasio and the first lady.

"It's new for me and I'll be 80 on Monday," Harlem resident Stephanie Tolbert said.

Everyone at the celebration on Friday said they were thrilled to see the day officially recognized.

"I think it's great more people are leaning about it," Harlem resident Lena Hilliard said.

"We need police reform and all these other things that are going to keep our community safe," she said.

The mayor announced his Juneteenth Economic Justice Plan Thursday, addressing racial inequities with a savings plans for every public school kindergarten student next school year, among other initiatives.

And earlier this week, the Parks Department announced it was naming 16 parks for Black Americans.

Last year, Juneteenth fell during the days after George Floyd's brutal murder, and it was marked by a series of marches throughout the city and country.